I entered in the inaugural Little Creek Cobia Open hosted by the Norfolk Angerls Club to benefit the local Children's Hospital this past weekend.  While I had never targeted cobia before, I had done a lot of research over the past couple of years.  I knew that sight casting was the preferred method in this area, but you needed clear and calm water conditions to have the best chance out of a kayak.  You typically rig up two casting presentations - one live eel and one bucktail jig, and at least one or two fish finder rigs with live spot or croaker on the bottom.  You also typically drop a chum bag for a nice slick to draw them in and encourage an increase in their appetite.

I also had read that cobia are like other predatory fish in that they love areas where the bait is funneled to them, so I talked it over with a fellow kayaker (Chris of TKAA - atthebay2) and we decided to target Blue Fish Rock off of Grandview in Hampton, VA.  Recent reports including the days leading up to the event had several nice catches of cobia in that area, so our chances were good I felt.  The forecast for the day was calling for an early morning shower with a chance of an afternoon storm around 3pm which was our scheduled time to weigh-in our catch anyway.

We launched a little after the sun crested the horizon and made our way out of Wallace's Marina and headed out to the mouth of the channel.  It was slow going, because we were hitting the incoming current and had to make our way about 3-4 miles offshore.

After a bit, we found the spot and set up our chum lines.  We anchored off and started the waiting game.  While we waited for the chum slick to get good and spread out, we dropped a couple of bottom rigs and spent some time catching live bait for our fish finder rigs.  We got into a good mess of bait-sized croaker with a few spot, and a new species for me, the roundhead.  They look like a skinny croaker at first but change colors into a brown camo pattern literally in your hands.  It was cool to watch.

Chris' reel started clicking after a couple hours and resulted in a nice five minute fight with an aggressice sand shark that even gave us a couple aerial jumps for good measure.  He ended up being about 3 1/2 - 4 feet in length.  Chris got a real close view of the razor sharp teeth while he tried to unhook him, but the shark was not cooperative at all, so Chris gave him a courtesy release and snipped the line close to the circle hook.  Sorry for the hazy picture but the lens fogged up on me. 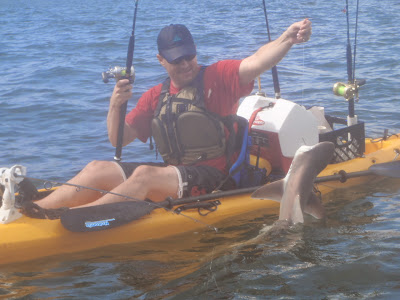 Shortly after that, the weather alerts started rolling in on my radio.  The first storm (and strongest one of the day) passed due east of us and hit the Eastern Shore pretty hard.  Right after that one, a second one flared up west of us and headed right towards us but ended up just dousing us inrain for about 30 minutes.  After we were soaked to the core, the skies cleared and sun shone through to help dry us off.
While we were recovering, I noticed a long line of clouds forming ominously to our west again only this time it spread far enough north that I knew that we would get hit if it ever developed.  Fishing in the Chesapeake Bay region is always a roll of the dice when storms are in the area.  I knew from past experience that they can form almost on top of you with little to no warning. 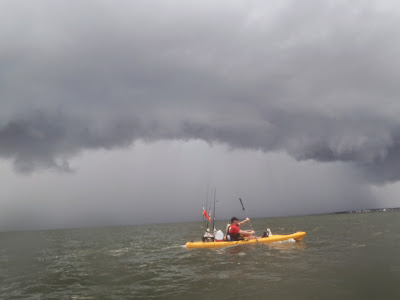 Sure enough, I was right.  The storm has a huge footprint and literally covered the entire region north and south of the Hampton Roads peninsula.  In the photo above, you can see the shore west of us close to the Hampton Roads Bridge Tunnel/Ft. Monroe/Phoebus area.  The tunnel was completely engulfed by the wall of rain heading our way.  We knew we were going to get a little wet, but we tried to take a sharper angle to shore and not worry so much about getting back to the launch which was way too far.  We even both dumped our chum bags to offload the additional weight slowing our progress back to safety, but it didn't matter in the end. 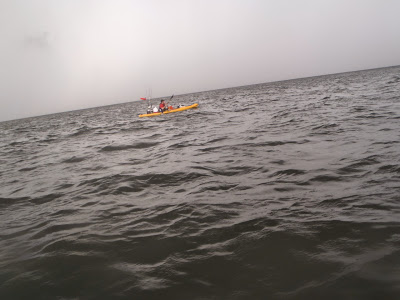 We never made it.  The winds increased in velocity to a reported excess of 30mph.  That may not seem to strong, but when you are on the water, it can get a little dicey with the churned up waves and rain hammering you.  The other issue you face besides avoiding capsizing is trying to keep a point of reference on land so that you can maintain some semblence of a straight track.  As you can see, our visibility became increasingly impaired as the storm approached......

We obviously made it back safely.  The Harbor Patrol was kind enough to come out and monitor our progress and keep a watch on us in case it the storm took a turn for the worse.  Fortunately, no hail or lightning was around, but we were completely exposed with no protection from the wind and rain.  Shortly thereafter, the storm passed us by and we were content to drift and catch our breath.  Since the skies cleared almost as quickly as they had turned ugly, we both looked at each other and agreed to drop the lines and try for a little while longer.  No such luck.  Only managed more croaker, although the size of the croaker did increase.  I'm sure our chum slick probably helped turn the bite on a little more for the smaller opportunistic feeders in the water.

In the end, we both had a good time on the water together even though Mr. Brown apparently didn't get the memo and was a no-show.  I still managed to catch over 40 croaker, a couple undersized spot and several roundheads, a new species for me.  I learned a few things on the day and decided that I will most certainly try this again.

Here's a video homage to our trials and tribulations on the day.


Until next time - tight lines and be safe out there.  Expect the best, but prepare for the worse.
Posted by Hanover_Yakker at 6:52 AM No comments:

The preparation for this day was long and stressful at times.  I had thought of everything in my mind.......

5. Patience and persistence......more critical than you can ever imagine - CHECK.


With preparation complete, now it came down to when.  Countless hours spent coordinating schedules, re-arranging appointments, checking, double-checking and ensuring everything was ready.  The scheduled window was fast approaching.  The anticipation was overwhelming and almost numbing at times.

Mentally reviewing the preparation I had done - checking, re-checking, doubting, questioning..............the seeds of doubt firmly taking root in the soil of my mind.  Did I do everything I could?  Only time will tell.

I made it home after work a couple Wednesdays ago and settled in for the evening when I learned that the water conditions had changed for the better and my plans were suddenly rushed into almost a state of hyper slow motion.  I had missed my chance a few times inthe past few years, but I was not going to miss this one.  I forced myself to breathe and stay calm.  Now was not the time to forget anything or rush and mess something up.

A 7lb. 12 oz WHOPPER and she's a beauty.  She was citation quality and definitely keeper material in my opinion!!!!!! 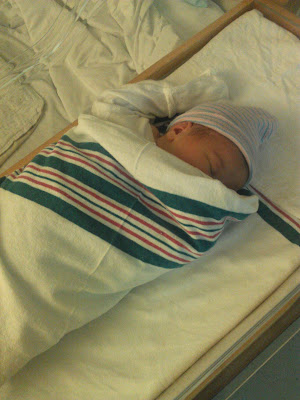