Had a blast this past weekend with fellow Hobie Outback owner and friend Joe Underwood and his son as we chased gar.  I had never targeted this species before, although I have caught a couple as by-catch when I was targeting smallmouth on the James River last summer.  I went to the local tackle shop to grab the tackle needed and ran into fellow Hobie Fishing Team member Grant Alvis.  He and his fishing buddy Josh having been laying waste to the gar recently, so I knew he would help me get the right stuff.


We launched late in the day and made our way out looking for bait.  The rigs were simple - I carried two spinning rods - a Bull Bay Spectrum Inshore Professional and a Tactical Series Black Ops Inshore.  A simple float and baited hook rig was the setup of choice.  As we pedaled out with both of our sons chatting at each other, we noticed a nice bait ball ahead.  Joe readied his cast net and literally dropped it right over the side and hauled in a few shad we could use.  He landed so many on the first cast that we actually threw most of them back. 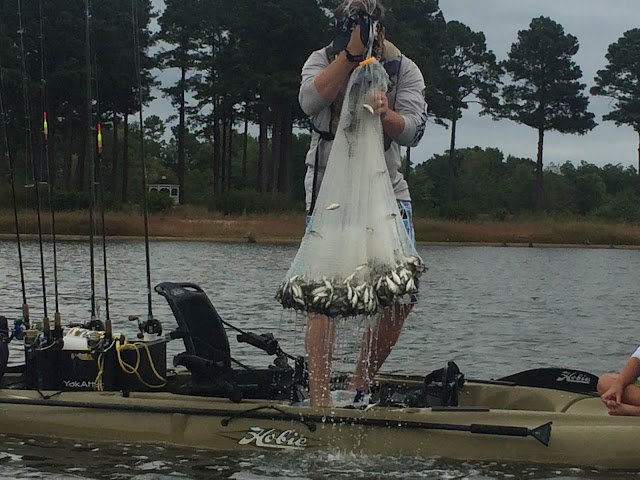 We made it to the spot and dropped lines in.  Shortly after we setup, Joe's son hooks up with a nice 41" citation gar.  A little after that, one of our rods get bit and the bait starts tearing away.  When my son went to set the hook, the line came free.  The leader had been cut, most likely by a passing gar getting the line caught on its scales and not a true hook set, because the bobber floated up a short while later and we were able to retrieve it.


After a bit longer, I re-baited my line and made a cast to the drop off.  Before I even closed the bail, the line took off running.  This time I raised the rod high to make sure the line wasn't snagged on its body.  After about a minute run, the fish stopped, so I handed the rod to my son and let him set the hook - FISH ON!  The gar started running in earnest and ended up turning us around in a complete 360.  After close to three minutes, the gar was finally surfacing and ready to land.  As I went to grab him behind the head, I could see how big this one was.  Just as I grabbed it and started to lift, he thrashed and spit the hook somehow.  It was a surefire citation, but I somehow didn't have a good enough hold on it to get it into the yak and it swam away.


On the day, we had three runs - one break off, one escape and one that I didn't let take the bait long enough.  Joe and his son managed five I believe - two landed and three that got away before landing them.  It was fun indeed having never targeted this species before, but I can assure you I will be back to chase these living dinosaurs again!  Next up for me though is the 11th annual Tidewater Kayak Anglers Association tournament benefiting Heroes On the Water and Project Healing Waters.


Tight lines and remember to take a kid fishing!
Posted by Hanover_Yakker at 5:00 AM No comments: