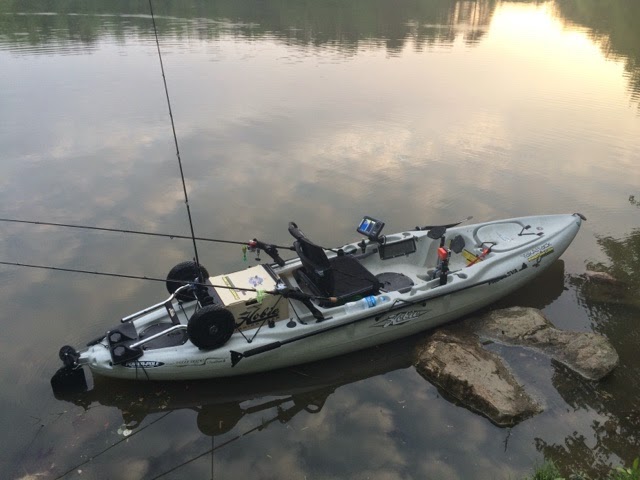 Sometimes you have to trust your instincts and just do it - so I did!  I took a vacation day mid-week and went fishing.  The weather window was favorable for a change, and I didn't have a single meeting or task due at work the following day.  No brainer!

The arsenal for the day was the same rod selection from last week but the lures of choice were different due to stained water conditions.  I tried a couple lures in lighter colors (a vibrating jig in chartreuse/white tipped with a PTL Grub and a PTL Sick Stick in Pearl) but the water clarity was less than 6".  So, I switched out to a PTL Sick Stick in Okeechobee Craw and a PTL Gator in Junebug.

This pond is mostly flat with an average depth of 4' and a multitude of overhanging brush and trees with several laydowns and brush piles from trees and brush that have fallen into the water over the years from strong storms.  With the water clarity as it was, you are forced to slow down and work literally every square inch of an area.  I come here a few times a year to simply hone my skipping and pitching/flipping skills.  The added bonus is that there are some fat bass lurking about and always manage to give me a nice fight.

It took a couple hours to find some takers but I finally managed to get into a few managing only three on the day and missing a few as well including one pesky bass that managed to break me off not once, twice but three separate times!   The first bass of the day was the best and measured in just shy at 20.75" and was very fat and rather perturbed that she was caught. 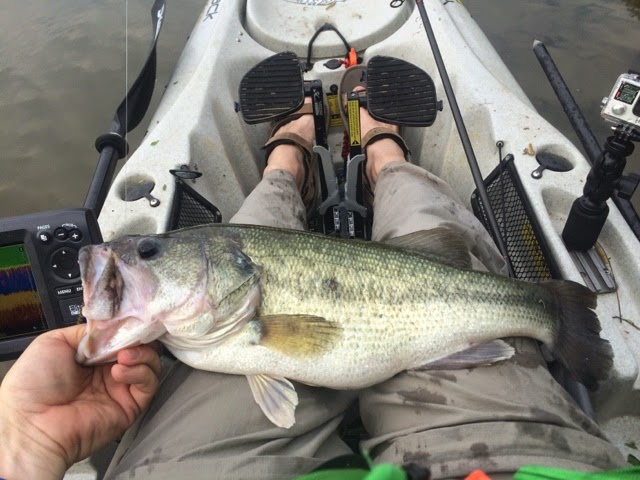 I had skipped my cast to a cut in between two big bushes and was met with a violent strike as the lure hit the water.  This big girl hit the Sick Stick so hard and fast that I barely managed to get the GoPro turned on in time to catch the last few seconds of the fight. 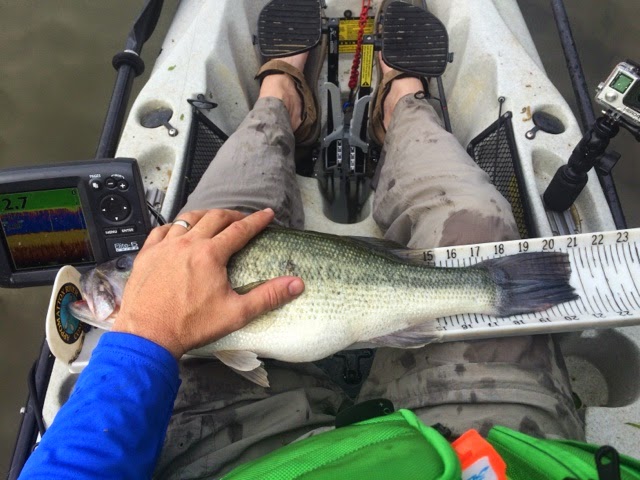 When the Sick Stick found no more interest, tried using a heavy tungsten pitching weight to punch through pockets of thick brush with a PTL Gator but to no avail.  Flashback a few hours earlier to the point of loading my gear for the day.  I stood there in my house looking at my gear and made the conscious decision to leave my terminal tackle tray thinking I would not need it - big mistake.  I'm sitting there in my Hobie Outback cruising about and chastising myself for not having different rigging options.

Apparently, it was the right decision.  Not five minutes later, I noticed my line swimming towards me but felt no hint of a fish.  I reeled in the slack and swung for the fences - hook sets are free right?  I was rewarded with another angry female bass that was none too pleased with her predicament.  After a brief fight, I brought her in and measured a healthy 19.75". 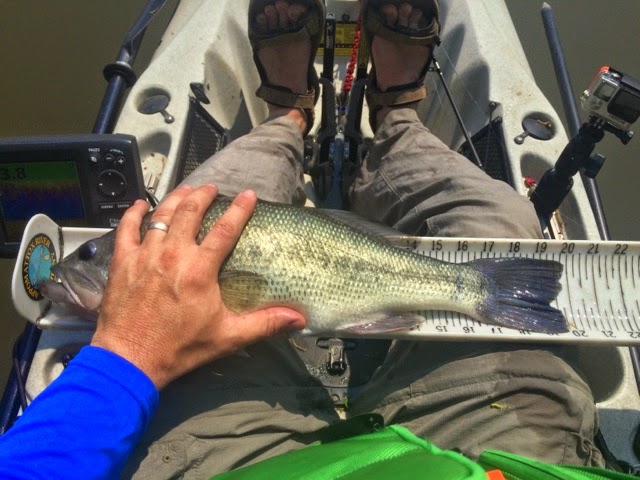 She must have really liked that PTL Gator because she choked it! 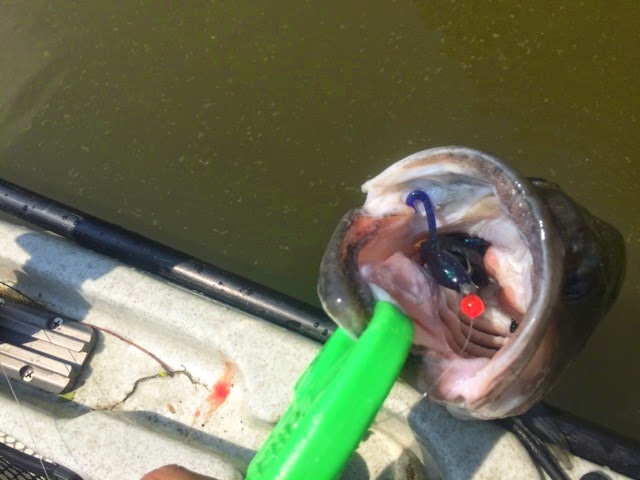 The last bass of the day was nothing to brag about but confirmed to me that the bite was over for the day.  A slow but productive day away from work.

Catching fat bass like this makes me want to play hooky again and very soon....... Tight lines and stay safe!
Posted by Hanover_Yakker at 6:03 AM 2 comments: 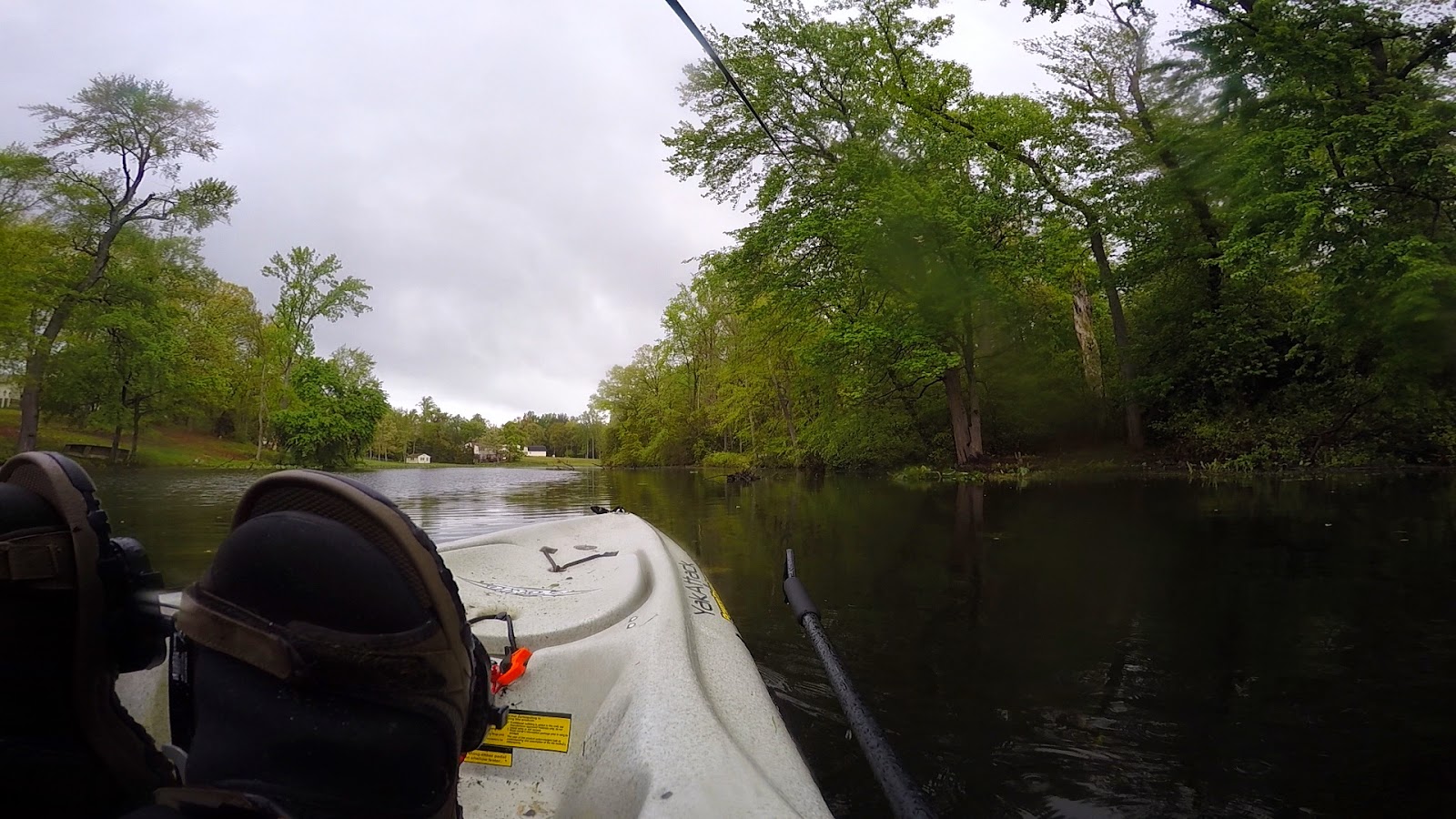 Lately, Mother Nature has had a vendetta against me on my Fridays off.  I vowed to go regardless last week and was rewarded with a fairly productive day.  I decided on a three rod (Bull Bay Rods of course) - three lure challenge.  The rods selected were:
The lures chosen to cover the water column, including one I had almost forgotten about..... 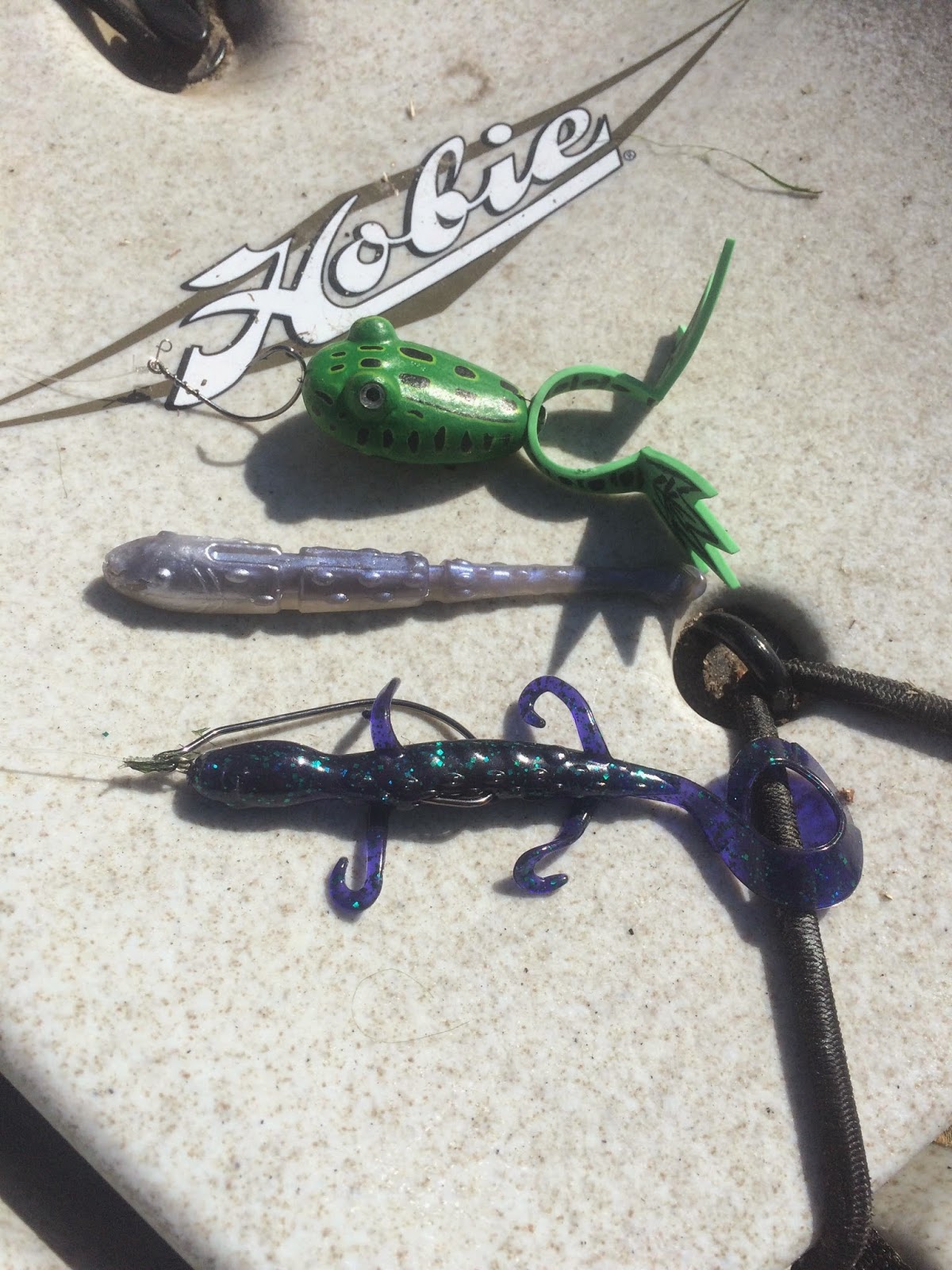 The first two are confidence baits for me, but I have to confess that I have never even tried a Carolina Rig in freshwater for bass prior to this day.  I launched fairly early in the morning in a light drizzle and stared with the Hammershad first to see if I could get a reaction bite.  Within 30 minutes, I had my first fish - a slimy 18" Chain Pickerel, followed by a shortish 14" chain pickerel a few minutes later. 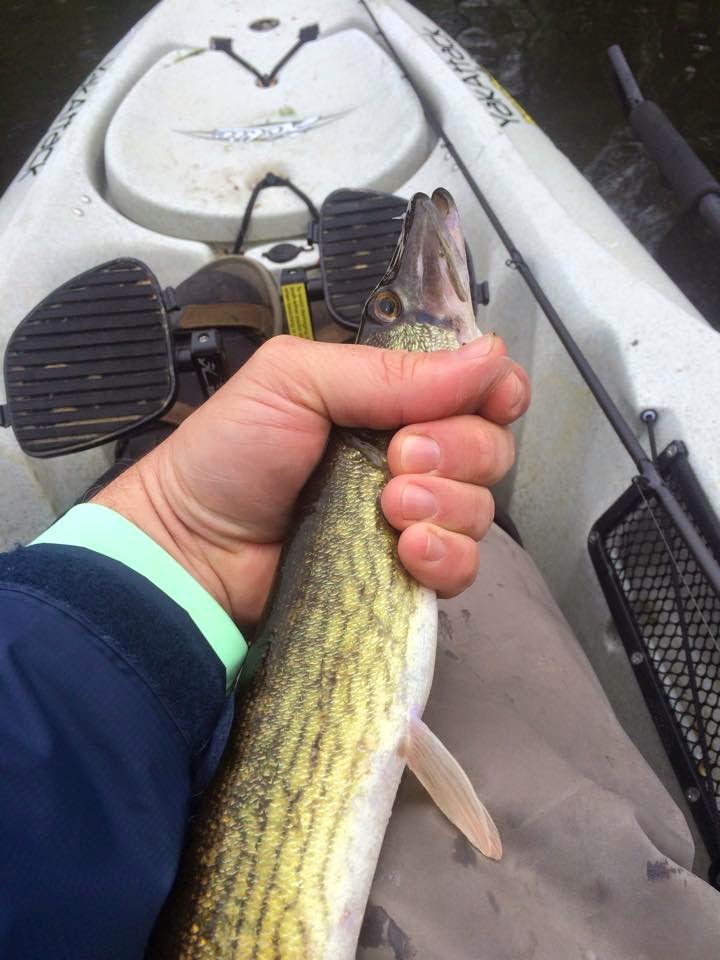 I switched over to the Clone Frog as I neared the lily pad fields and spent the next two hours working the pads cuts and edges.  I missed the first two fish when they spit the frog before I could even set the hook.  I doused the frog with some PowerTeam Lures Hog Tonic and went back to work.  A few minutes later, I approached one of my go-to spots on this pond.   I cast the frog over the laydown with the line laying across a limb atop the water.  I dragged the frog over slowly and plopped it down.  A couple twitches was all it took before a fat 17" Largemouth Bass sucked it in and held on long enough for a hookset.  I managed to capture a topwater strike finally as well using my trusty YakAttack Panfish Portrait.....


Once the rain stopped, the skies started to clear and the frog bite disappeared.  I switched back to the Hammershad for a bit and quickly landed a few more pickerel and a couple more largemouth.  By the time I had made the full circuit of the pond, I switched over to the Carolina rigged Gator.  I worked the deeper cuts in the pond to no avail for an hour.  I switched back to the Hammershad and landed some small pickerel and a couple small bass.  By that time, the winds were starting to pick up as another storm was approaching, so I decided to call it a day.  Final tally on the day - 12 fish (7 pickerel and 5 bass).   All in all, a great day on the water.  Here are a few pics from the day of the better quality fish.... 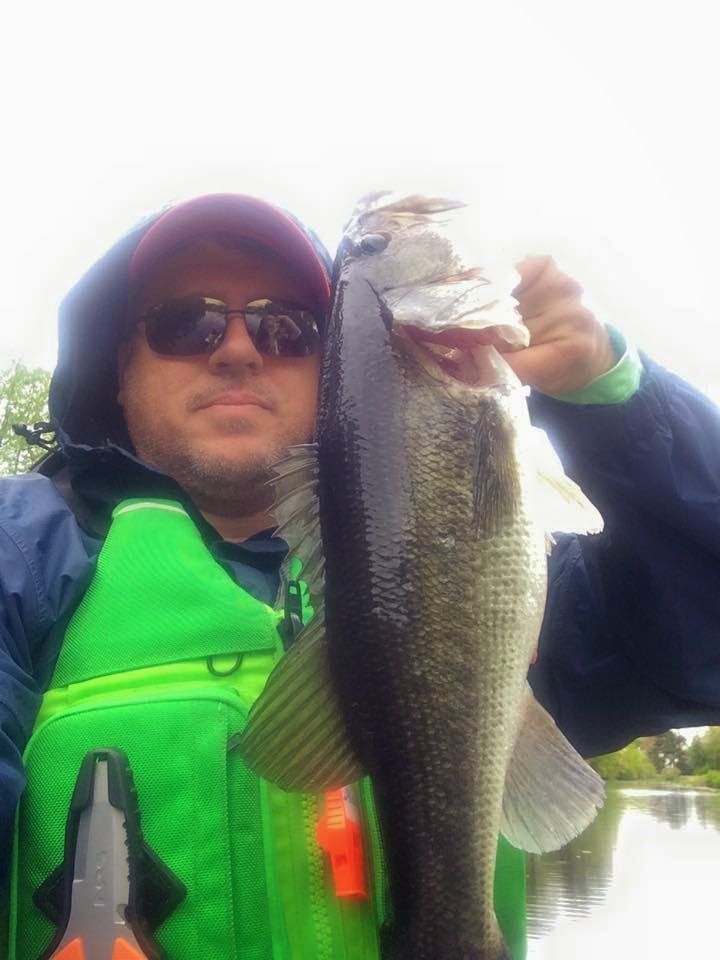 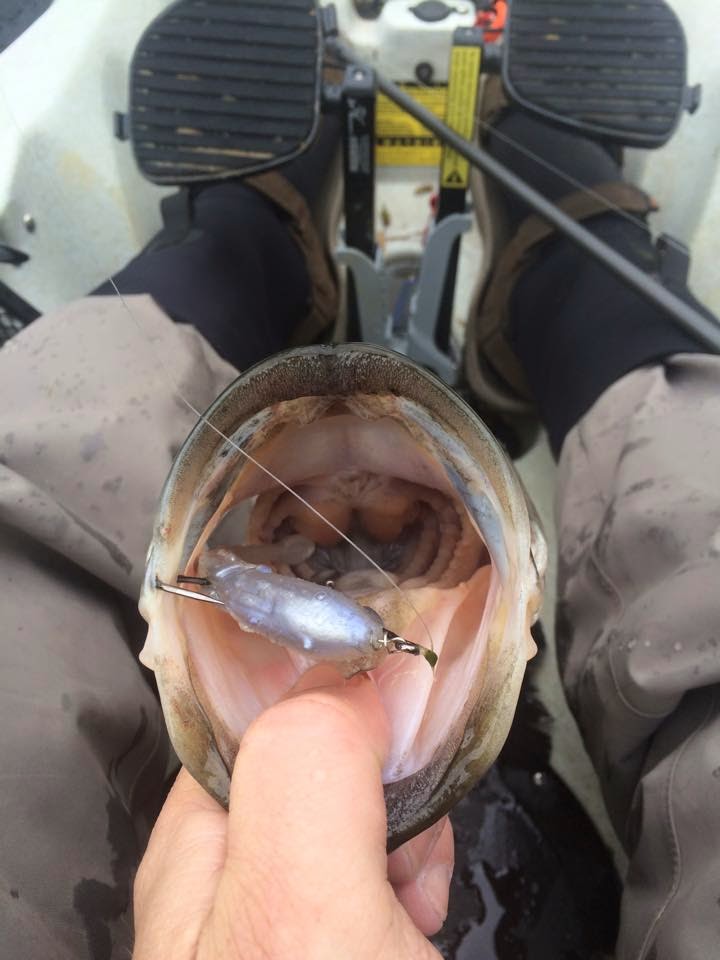 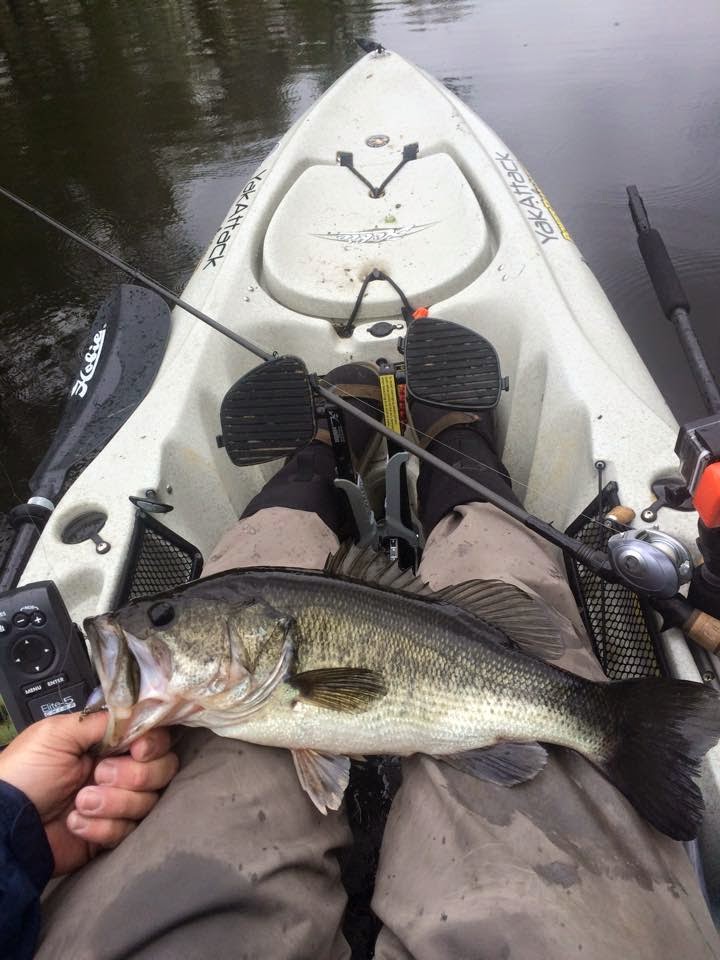 Posted by Hanover_Yakker at 7:50 PM No comments: