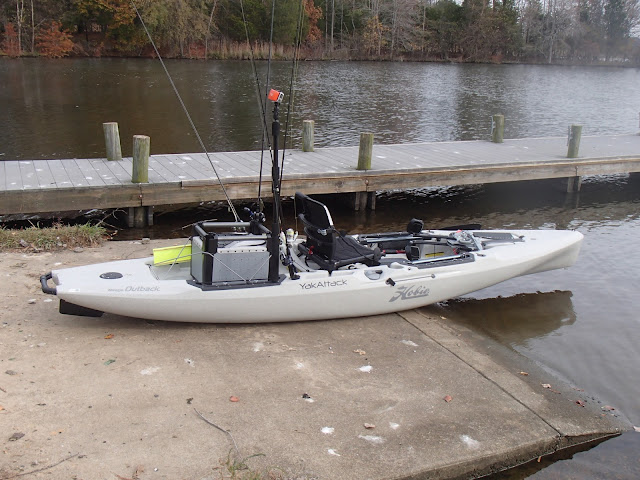 You've heard it before - I couldn't go fishing because of (insert any reason you have used in the past)!!  Well not this time!  I made plans to go out on Friday, my day off and again on Monday (Veterans Day observed by my company) and pre-rigged my Bull Bay Rods arsenal and loaded up all the tackle and YakAttack gear in my CRV for an early morning outing.  Once I got my kids off to school, I made my way back home, let the dogs out one more time and loaded up my new 2019 Hobie Outback for some fishing.  Mother Nature tried her best to literally rain on my parade, but I wasn't going to let that deter me.  Even as I pulled up to the launch and the rain continued to fall, I launched belligerently into the cold winds and early morning haze. 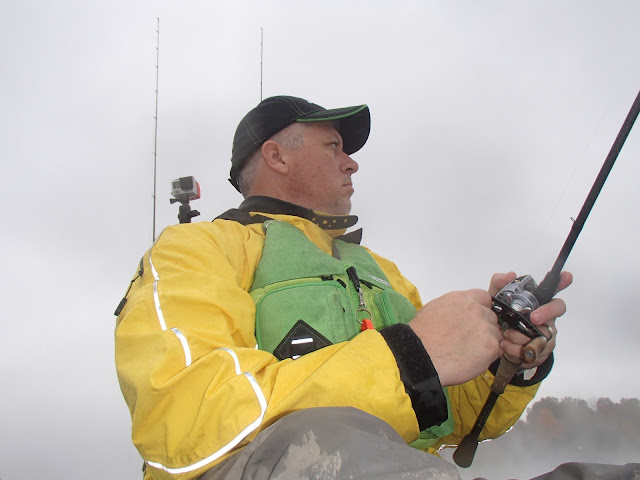 A few minutes to unload and a few extra minutes to change into cold weather gear were all I needed yo get the day started right.  I launched and made my way straight to the nearby rock jetty and started working a few different presentations.  First was a moving bait - a PTL JP Hammershad with an Owner Flashy Swimmer head, later switched to a twitch bait as well but no takers.  Second rod was rigged with a shaky head PTL 7" Finicky Tickler to work the rocks but no bites.  Third was a PTL Rock Crawler Jig paired with a PTL Craw D'oeuvre if things really slowed.  Lastly was a shot in the dark lure - a River2Sea Whopper Plopper.  I had noticed some top water swirls in a nearby cove when I crossed a nearby bridge on my way to the launch.

I figured what the heck, so I positioned myself parallel with the jetty, then I pulled the Plopper rod from the holder and slung the Plopper near the jetty - slow retrieve but no takers.  Second cast was about 4' away from shore but it traversed the drop off into deeper water.  Half-way back on the retrieve. and the Plopper is sent flying into the air by an overaggressive buck bass.  He hits it a second time and is stuck by both treble hooks.  He's landed and released measuring around 10".  Another cast into slightly deeper water and that's when things started to get more consistent over the next hour or so.

The rains came in earnest and really drenched me and chilled me good, but I toughed it out.  The winds even picked up with the rain and started pushing me down the jetty wall.  I kept working the Plopper and would get a strike almost every 15 minutes or so.  Once the rains dissipated, the top water activity took a noticeable turn and the bite tapered off.

I switched over to the PTL Tickler and started working laydowns and exposed brush pockets.  Landed my best two fish of the day using that technique.  Both times, the Tickler hit the water next to the submerged wood and was instantly devoured on the free fall - both times the bass were gut hooked they had inhaled it so deeply before I could even close the bail on the Stradic and set the hook.  Both fish measured at 18" on the HawgTrough but sadly my battery had died by that time. But managed to get a pic of this chunky 16" before the battery took a hiatus on me. 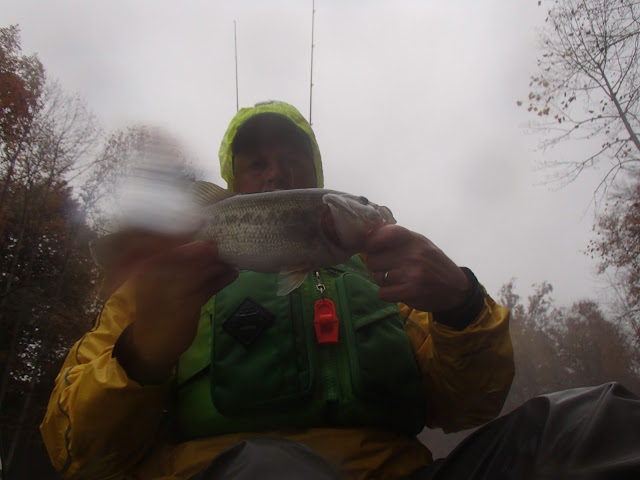 Landed 8 bass on the day, lost 2-3 as well.  All in all a successful outing in the new Outback I'd say!

I made my way back on Monday but targeted docks and wood for a few hours.  Managed a couple small ones but nothing too significant. 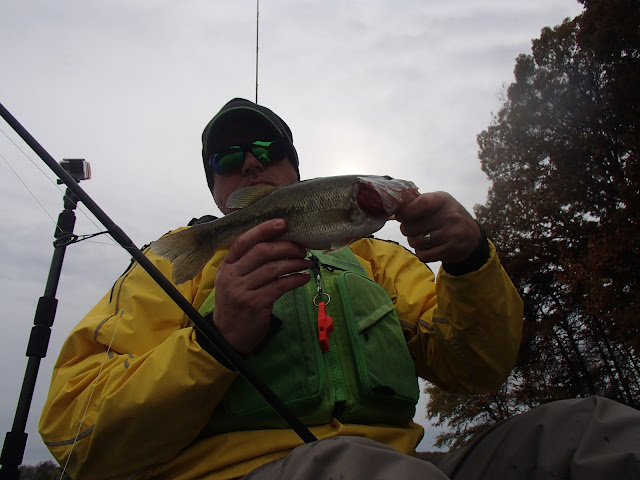 I'll be back again continuing my study of this body of water in preparation for landing that elusive monster I know is laying there in wait!

Until next time - tight lines and stay safe!!!
Posted by Hanover_Yakker at 7:50 PM 2 comments: