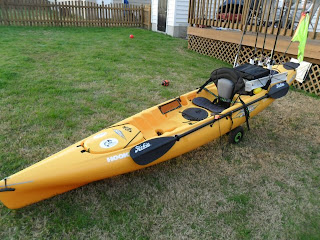 This past week marked the start of a new relationship for me........I am the proud owner of a 2012 Hobie Revolution 13.  I enjoyed my time on the water with my previous kayak (a 2010 Wilderness Systems Ride 135), but the time had come for me to switch to a kayak that was easier to maintain position in areas of high current and wind - the natural choice was a Hobie.  This past summer, I had the opportunity to use a Revolution 13 for the 4th of July weekend and immediately determined that this was the kayak for me.

I decided what better way to get the kayak wet than to venture out into the saltwater at the Hampton Roads Bridge Tunnel and try for some stripers.  I launched at the end of a slack tide with very little current still flowing and set out to test out the new Revolution by maneuvering in and around the bridge pilings and position myself into the wind and tide.  I ran into Wayne Bradby on the way out as he was heading in.  I chatted a bit with him, and then I pedaled away to get more comfortable when I realized that the Mirage Drive position was too high, so I moved it from position 4 to position 6 and immediately noticed how much more comfortable this position was.

I had pedaled out into the darkness away from the bridge to pass the time and started to see random surface strikes but nothing too aggressive.  I passed the time by chatting with another kayaker by the name of Miles who was also in a Hobie, a 16' Adventure.  A short while later, I noticed the start of a the current change, so I pedaled back to the bridge and found a spot where I could park myself against the current and began the wait until the stripers would come out to play.

Around 1:00am, the activity really started to get fast paced.  I started out with a Mirrolure and landed 2 quick lower slot stripers at 18" - too skinny for me to take back home for dinner.  I kept working the Mirrolure but noticed the bite turned off, so I switched it up to the Marsh Works 3" Bayou Thumper in Pearl and quickly landed another lower slot striper at 19" - a little better but not the size I was looking for.  I wasn't getting much action on the pearl, so I switched colors to Voodoo Brew (a dark smoke color with dark flecks in it) and started getting more bites but nothing consistent.  I still landed the largest one for the night so far at 21.5".  So things were looking up. 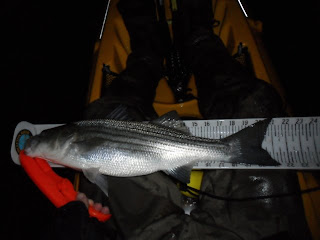 When I didn't get any more action on the Voodoo Brew, I decided to switch colors again to Purple Thing and hit the jackpot - the next 30 minutes for me were hot and heavy with more solid strikes and thicker fish accounted for.  In total, 10 stripers were landed on the Purple Thing color and all were nice and thick with the two best ones coming in at 22.25" and 21.5" respectively, with the latter the thickest of the night. 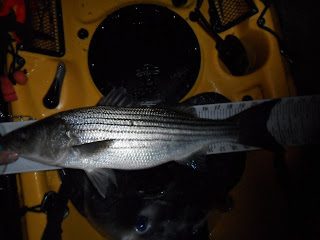 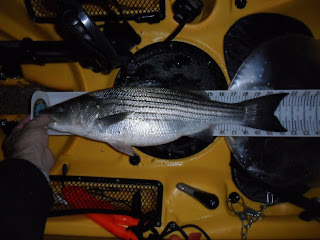 All in all, it was a great first outing in the Hobie Revolution 13, and I look forward to many more opportunities to land more fish in this awesome fishing machine.  I can only hope that my passion for fishing out of this kayak will be adequately represented in this blog.  Tight lines and safe travels folks.  Until next time.
Posted by Hanover_Yakker at 4:05 PM