That's review and recon/research folks.........I wish it was rest and relaxation.

The winter of 2011/2012 has yet to rear it's ugly head here on the peninsula in Virginia, although days of high winds and low temps are starting to increase in frequency of late.  Many kayak anglers have taken advantage of this time to get out almost daily to chase after the various species that can still be found in the bay area.  For myself, this time of year is hit or miss logistically due to work, family events and wind conditions.  On Wednesday February 1st, the air temps were forecast to be in the low 70's with winds in the 10-15mph class.  A perfect opportunity to get out on the water for some long overdue recon and testing of potential tackle setups for the coming year. 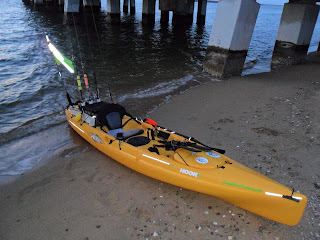 I recently purchased a few items I had been wanting for some time: an Abu Garcia Revo Inshore baitcaster paired with a Shimano Teramar Inshore SE Series rod; an Okuma EVx 6'6" MHF casting rod paired to my existing Abu Garcia Revo S; and a Shimano Calcutta 200B paired with my existing St. Croix Mojo Bass Spinnerbait model rod.  I also was yearning for some time on the water to test out my recent flush mount modification and to try some different Marsh Works Bayou Thumper and hair jig combos.  As you can see, I had a few things lined up to keep me occupied on the water, and to be quite honest........fishing really wasn't the goal for the day.  GASP!!!  Hard to believe I know!!

First order of business - the YakAttack VisiCarbon Pro and the new Scotty 444 Compact Flush Mount install from two weeks ago worked flawlessly.  I installed the VisiCarbon Pro along with my other gear and off I went peddling about the Willoughby Spit shoals and rip line.  This area can get pretty nasty in high winds and seas, but fortunately, the waves were slow rollers and handled easily by the Hobie Revolution 13 even in the steady winds.  Winds were blowing straight out of the west down the main river channel across the tunnel passage, but I avoided that area and stuck to the inner portion of the rip line and rock jetty.  I pedaled about for close to 2 hours before taking a quick break to change out some of the lures on my setups and snap off a few photos.  Now I did technically "fish", although I knew I was not likely to catch anything having launched into the tail end of the ebb tide window. 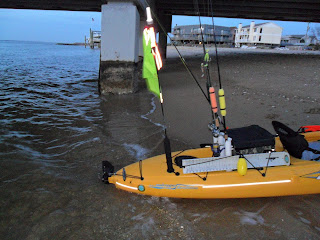 As you can see by the picture above, the VisiCarbon Pro is installed aft of the crate and rod holder storage unit and was not at risk of getting snagged by any treble hooks or other items on the kayak.  Some would question the location as a risk for a snag or getting hit on a back cast, but for me I am typically casting no more than 20 yards at any given moment and that I can accomplish with a simple side cast or shortened overhead casting motion.  Now, if I end up using my 10' fly rod in this kayak in the future, I may have to use a higher back cast or sidearm roll cast technique, but I am installing a secondary mount location in the next few weeks to address this particular problem.  For now, the placement of the flag is optimal for my fishing techniques.

On to the next task - equipment testing.  For those that read my blogs, you probably recalled that the Revo Inshore/Teramar combo was used rather extensively a few weeks ago on my epic night of 40 fish.  However, I wanted to test out the setup again in higher winds throwing lighter presentations.  The lure of choice tonight was a prototype Marsh Works skirted jig paired with a Killa Squilla.  The jig itself I was testing was extremely lightweight, most likely 3/16oz. but when paired with the Killa Squilla resulted in a nice 3/8oz. combo.  I was able to cast this combo easily into the wind a good 20 yards, but the current was not allowing the bait to get low enough in the water column for it to be effective.  In the future, I think I will opt for a heavier plastic body or see if there is a heavier version of the skirted jig.  I can see this lure combo being very effective on the saltwater flats for tailing Redfish or even as a freshwater bass lure.  I plan on testing it out in the freshwater in the coming months to prove this theory. 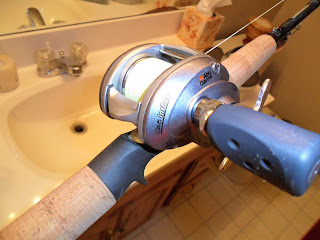 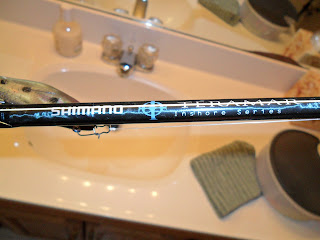 The next item to test was the Okuma EVx rod paired with my Revo S.  I must say that I was pleasantly surprised with the feel and performance of this rod in the brief time I used it on the water.  I was using a 4" soft plastic swimbait tied on with a 15lb. leader matched up to 20lb. braided line.  The rod itself is a 6'6" Medium Heavy power rod with a Fast action.  It is well made and uses quality components - IM8 blank, Fuji ACS reel seat, stainless steel guide frames with zirconium inserts for braided line to name a few.  I was able to feel the subtle thumping of the paddle tail on the swimbait even in the current.  While I am not the most precise caster on the water, I was able to cast this rod and place my lure in the spot I wanted with little to no effort at all.  This rod will most likely end up being a freshwater rod for soft plastics and frogs, but it was comforting to know that I could take this rod setup as a backup on some of my future saltwater outings for Summer Flounder, Spadefish and slot Redfish. 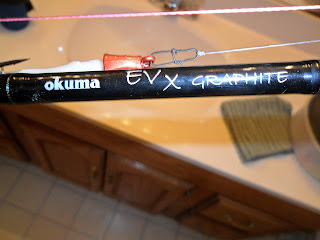 The last piece of equipment to be tested was the Calcutta I had purchased used from a fellow kayak angler.  I have to admit I was a little skeptical at first buying a used reel from someone I had never met before, but I had no problem in years past buying something sight unseen used off of Ebay, how could this be any worse?  I purchased the reel at an awesome price and was very anxious to get my hands on it and test it out.  When I opened the package last week, I was pleased with my purchase and spooled her up with 65lb. braid and a 30lb. mono leader.  I figure this setup would still give me castability but still have enough power in reserve in case I hooked into something bigger.  I paired the reel up with my 7'0" St. Croix Mojo Bass MH Fast rod and tied on a 1/2oz lipless crankbait.  I set the mechanical clutch and tried out a few short test casts with no backlash.  Promising I thought.  Let's snap off a couple "KVD-esque" type of casts - no backlash..........a devious smile made its way across my face as I spent the next 15 minutes snapping off cast after cast and nary a backlash to be found.  A successful test session I think.  I could easily see this rod being my primary sight casting rod in the spring on the Eastern Shore or for heavier jig-n-craw setups in heavy cover in freshwater. 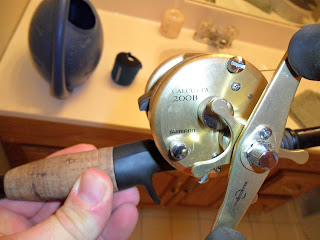 I did notice one potential concern with the reel, but I am not 100% certain there is a problem yet.  Once every few casts, I would feel a subtle "tick" during the retrieve.  At first, it didn't phase me, but I want to make sure that the sensation I felt was not just a poorly tied leader knot catching on the top guide during the retrieve.  I may take it to a nearby pond and do some shore casting to test it out again, only next time, I will take an additional length of the 30lb. mono leader and tie a different style knot, as well as a length of smaller diameter leader just in case.

Last but not least is the review session of pairing my preferred soft plastic Marsh Works Bayou Thumper with a small 3/16oz. bucktail jig.  I already knew that the weight of the jig was too light for normal use; however, I had launched into the end of the ebb tide, which meant the slack tide was in full force after I had relaunched from my initial break.  I tied the lure on my current favorite Speckled Trout spinning rod setup (my Diawa Regal XiA 3000 paired to a 7'0" TFO G. Loomis Signature Saltwater Series #4 spinning rod) and started casting away into the slack tide.  The lure combo was easily retrieved in a swim jig fashion causing the bucktail to flare out on each pause but still retain the action of the paddle tail the Bayou Thumpers are known for. 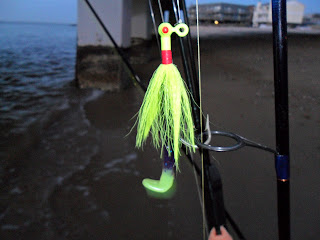 I ended my day on the water at 9pm, just shy of the flood current beginning.  Total time on the water was 5 hours, and I accomplished all of my goals for the trip.  I left with the confidence that my review sessions and recon techniques for performance further validated the gear choices I had made not long ago.  I am already anticipating the next opportunity to get back out on the water with these combos and chase some fish for real.  I also left knowing that my flush mount installation was the right location and will significantly increase my visibility on the water and add to my overall safety-oriented profile.

Until next time folks, be safe, be smart and most of all share your time on the water - whether it is with a family member, a friend, a kid or even better a veteran or current service member - get out and enjoy one of the most important natural resources we have on this planet.
Posted by Hanover_Yakker at 6:33 AM