My First Outing as a Hobie Fishing Team Member

You read that right.  I have been given the opportunity to represent the Hobie Fishing Team as the Local Pro for Central Virginia.  The folks at Appomattox River Company were very supportive in this endeavor and were it not for them, I am not sure that this could have ever been possible.  My heartfelt thanks go out to Vic Sorenson and the whole ARC crew for backing me on this one.  As a way to celebrate this recent opportunity, I met up with another fellow Hobie owner, Joe Underwood, and decided to go fishing at Rudee Inlet.

The original plan was to head to the Eastern Shore and scout out some new fishing spots and chase after that ever elusive bull red I have been longing for.  When we crossed the Hampton Roads Bridge Tunnel complex, the waves were cresting at 7-8' with severe chop and whitecaps with winds were gusting out of the north at nearly 30 mph - not the conditions you want to see when planning an outing on the Eastern Shore.  So I erred on the side of caution and opted to launch at Rudee Inlet which is somewhat more protected. 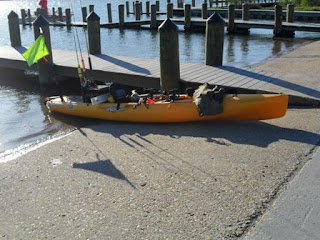 We launched at 10:30am with air temps around 52 degrees and made our way around the grass islands towards the front of Rudee Inlet to look for some flounder.  Along the way, we stuck close to the western side of the inlet to cut down on the wind across the bows of our Hobies.  We made it to the inlet and dropped our lines in the water and started hunting for the flatties.  I was using a Marsh Works Killa Squilla in Pearl with a Chartreuse Tail on a 1/4oz Copper Bull Red Jig head and Joe was using a shad shaped soft plastic, which I believe was a Bass Assassin, in white as well.

Joe missed a couple hits in the heart of the inlet, but I decided to move down further into the front main cove.  The winds weren't as bad in the front cove, so we were able to vertical jig our presentations while drifting along broadside to the wind very slowly.  I struck first with a smallish flounder that measured in at 16 1/4". 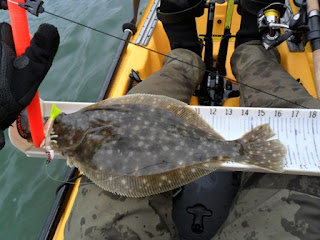 We didn't find another fish in the front cove, so we made our way back towards the main inlet and the grass islands.  We fished all types of structure along the way - docks, mooring poles, bridge pylons, rock jetties, and drop offs......nary a bite was to be found.  So we decided to head back towards the launch and try for some Bluefish and Speckled Trout.  Along the way, an Osprey took interest in me while I was peddling and casting and just sat there perched in the tree squawking and watching me. 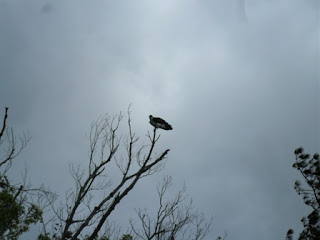 Joe had a couple more strikes but no hook ups and decided to call it a day earlier than planned in hopes of getting out on Saturday.  I bid him adieu and wished him safe travels. It was close to 3pm, but I decided to hang around for a tad longer.  I watched the various signs of life that abounds in Rudee Inlet.  All forms of aviary species inhabit the area, including White Egrets, Blue Herons, Canadian Geese, Ospreys, Cormorants, Seagulls and of course Mallards. 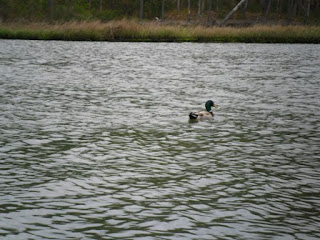 Like I said before, I decided to hang out a bit longer.  I'm glad I did, because the bite suddenly turned on for me.  First, I hooked into a bluefish that measured in at 14". 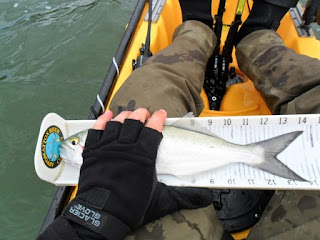 A few minutes later, I hook into something that fights a little stronger - a 19 1/4" Speckled Trout that apparently had escaped with its life from the clutches of an Osprey previously.  I saw distinct sets of talon marks in two separate locations on the right side of his body. 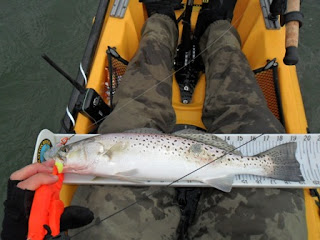 A few casts later and another bluefish at 14 1/4", followed by another at 14 1/2" and another at 13 1/4".  I decided to head in a for a brief moment to take a bathroom break and to eat half of the sandwich I had packed.  I weighed my options at that point - it was 3:30pm and I could either stay out a little longer or I could pack it in and head home.  I decided to tough it out a little longer in the stiff wind, but I was only able to manage one more bluefish.  It measured in at 14 1/2". 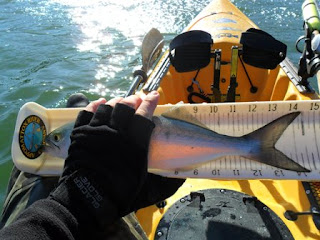 The lure of the day was Marsh Works in spades and the jig of choice was the 1/4oz Bull Red Jig Head.  I tried a couple other presenations with a MirroMullet but had not luck.  As mentioned earlier, the flounder was landed on the Killa Squilla in Pearl with a Chartreuse Tail, while all of the Bluefish and the lone Speckled Trout were landed on the Bayou Thumper in Morning Glory and White.
Speckled Trout and Flounder both have teeth, but normally do not tear through too many of my Marsh Works lures, but Bluefish on the other hand are known as "Chompers" for good reason. 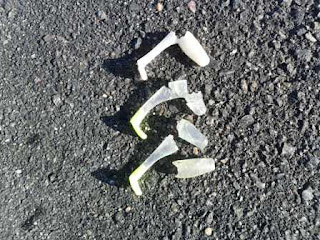 For the five Bluefish I caught, I went through four thumpers - 3 of the Morning Glory and 1 Pearl.  You can see the remainder of the carnage above that those little toothy critters inflicted.  By this point it was 5:30pm, and I was getting a little tired from battling the wind all day.  I decided to call it a day and head on in.

While the day itself was not a huge success in numbers for the 7 hours spent on the water, I did manage to catch some fish and had fun with a friend.  All fish were released unharmed and swam away healthy.  All in all, I think it was a great way to christen my first day on the water as a member of the Hobie Fishing Team.  I look forward to sharing my experiences on the water and my involvement with Heroes On the Water with you all as time rolls on.

Thanks again to the folks from Hobie for making this dream a reality, and to Vic and the crew at Appomattox River Company for supporting me in this endeavor.

As always, be safe out there, leave the water cleaner than when you launched, and take a kid fishing.
Posted by Hanover_Yakker at 7:16 PM