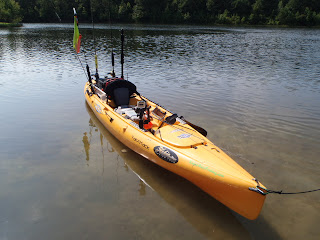 Ever heard of Smithfield, VA?  Here in the state of Virginia, most people have primarily because of Smithfield Hams.  Country ham is a staple of life for many folks in this area, including myself.  I love country ham for breakfast and order it whenever I can.  What I didn't realize was that Smithfield, VA also has some exceptional fishing waters.  Recently, I was afforded the opportunity to assist in the scouting of some private property for future Tidewater Heroes On the Water events.

The private location was a series of 25 acre ponds separated by access roads and trails completely off the beaten path.  The depths of the water ranged from 6" exposed flats to deeper holes that reached up to 15' in some areas.  This variation creates exceptional transitions and ambush points for predatory fish.  From discussions with the owner, the ponds are stocked with catfish, but also has a thriving bass and bluegill population.  After a brief introduction, overview of the rules and where we were permitted to explore, we launched our kayaks and began to assess the location for fishability and opportunities for veterans to catch some fish.

As we were preparing to launch, a nice 20" largemouth swam right in front of the main launch........a promising indicator wouldn't you say?  The members of TKAA split up to attack both of the main ponds simultaneously - Bill Ragulsky, Mark & Kris Lozier, Wayne Bradby and Lars Antoniszczak attacked the left pond while Chip, his son Drew and myself attacked the righthand pond.  Drew launched first and proceeded out to the island in the middle and quickly landed a spunky little 12-14" largemouth.  I made my way down the lefthand side and quickly landed one myself just under the 14" mark. 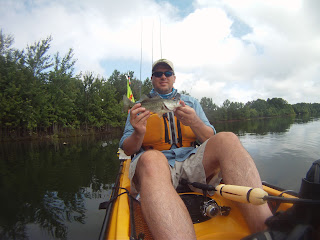 I was using my favorite spinning combo for soft plastics, and I had rigged up a 5" finesse worm paired to my favorite soft plastic jig head, the Confidence Baits Draggin' Head.  I kept working my way down the bank working every nook and cranny that provided any form of cover.   As I made my way back into a cove, I noticed the water was still crystal clear even after a recent storm had hit the area the day before.  I typically try and avoid crystal clear water in such confined quaters such as this cove.  Stealth and precision are keys to landing fish in areas like this but distance is a key factor to increase your odds of not spooking any fish.  Also, the slightest noise or improperly placed cast can spook a fish as well.

I was about to bail on this cove and move on when I spotted one of my favorite target areas when hunting for bass.  It was a slight change in the bank shoreline creating a deeper "pocket" that was sheltered by an overhanging tree.  I made a slingshot cast right against the bank and let it sit for a few seconds.  A subtle twitch was greeted immediately by a hungry bass.  It zigged and zagged trying to throw the hook, but the Draggin' Head held true......that is until the bass made a very tactical and unexpected move.  Just as I was about to lift her into the kayak, she made a 90 degree turn and raced under the kayak creating a sudden leverage advantage and snapped the line before I had a chance to free bail her.  She was easily over 17" and was not the ending to the fight I had envisioned.

Chalk that one up to poor boat positioning relative to the closeness of the bank in this smallish cove.  If I had been just a scant five feet further away, I might have had a chance to react quicker.  Not to be dismayed, I tied on a new Draggin' Head and a new finesse worm and hunted for my next target area.  As I moved down the bank, the water became real shallow and not "fishy" enough for a good sized bass based upon my past experience.  However, I noticed that there were a lot of panfish swimming about, so I tossed out a 1/8oz. black Rooster Tail with the silver blade and quickly had a few hits but no solid takes.  A couple minutes later and a spunky little gremlin was added to the mental catch log for the day. 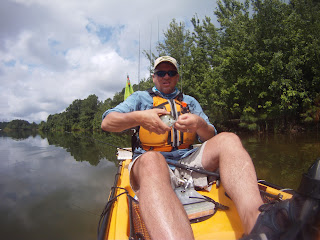 It wasn't long before I found another similar spot further down the bank.  Sure enough, it held another bass, albeit far from the size of the last one I lost.  Nevertheless, a fish is a fish when you are pattern developing on any given day, especially on a new body of water. 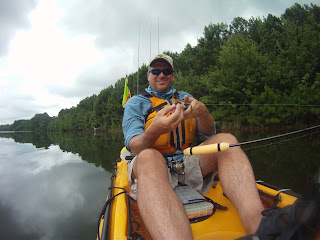 When I released this one, I was preparing for where my next cast would end up when I noticed a torpedo-like shape out of the corner of my eye.  I waited briefly until I noticed the shape move slightly and continues moving slowly along the bank.  I slowly opened the bail and made a subtle wrist cast to my left close to the bank about 20' ahead of the fish' current track.  My worm made a subtle 'plop', and the shape launched at my tasty offering creating a noticeable wake as it pounced on my lure.  At first I didn't think she had it or took any interest in it when she swam away slowly.........until the slack in the line started to move behind her.  I quickly set the hook and was greeted immediately by the fury of a perturbed bass.  A short fight later, and a chunky 17.5" largemouth made it's way into the kayak. 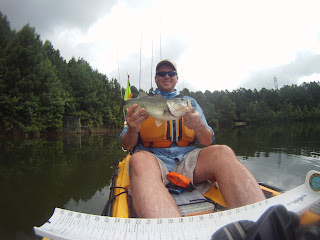 She was released a short moment later and swam away contently knowing she had been afforded the chance to go forth and grow bigger.  I kept working the pattern all day and found a few more hanging tight to cover but still willing to strike at my finesse worm.  The next one was a feisty 16" largemouth......... 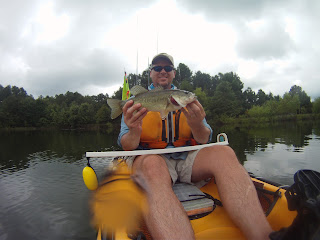 At this point, I had worked almost the entire pond and wanted to make time for the next one.  I made my way back over to the launch and dragged my kayak across the path and into the other pond.  I worked a treeline that had plenty of shady pockets to target.  I worked each little pocket and was pleasantly surprised when a big bluegill decided the finesse worm was the right size.  This 10" hit like a bass and fought almost as hard even pulling some drag on my spinning reel at one point. 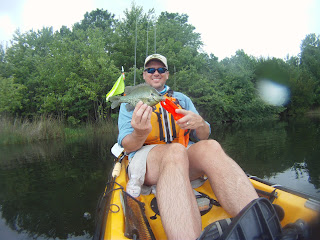 The shaded cover pattern was working good, so I kept looking for more of the same.  Unfortunately, the banks on the back half of the second pond did not afford the same structure pattern, but I knew s similar shaded location would be a good target area.  I meandered around the back half of this pond and found a shallow flat that was shaded by a large tree.  I made a cast across the flat and into a shaded area and was greeted almost immediately with another solid hit.  This one measured in at 15" and put up a nice fight. 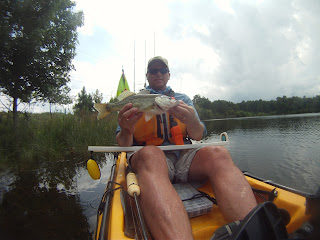 As I released her to go back and get bigger, I noticed several large bluegills patrolling the flat, so I switched over to my ultralight once more and worked the black Rooster Tail across the flat and was promptly greeted by another bluegill - this one measured in at 9.5". 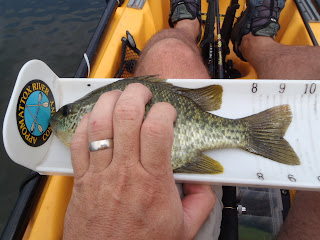 A great first outing at this potential new location for our future Tidewater HOW events.  We met some amazing like-minded individuals and hopefully can align our schedules in the future to share in this wonderful location and all it has to offer.

Tight lines, be safe and take a kid fishing!
Posted by Hanover_Yakker at 2:06 PM