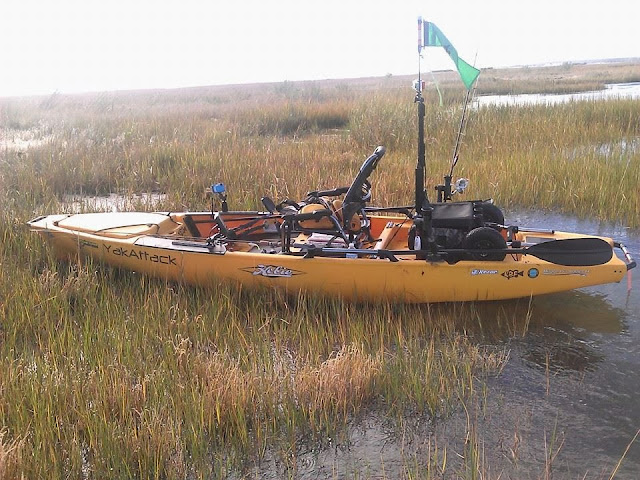 Had a chance to hit the water for a brief outing recently searching for that elusive citation Speckled Trout.  I launched at the start of the flood tide in the pre-dawn hours into a slight breeze of 8-10 knots (believe me, that's practically dead calm for my outings these days).  I had three target areas for the day planned, and I needed to make haste if I wanted to be able to hit all three in the short window I had afforded to me this day.

After a short pedal, I made my way to the first area, a long shallow point that normally holds fish.  I made a cast to the starboard side of the Pro Angler and slowed my pace to a slow roll the Hammershad.  Within a minute, it was hammered but there was little fight.  I knew it wasn't a speck or red for certain.  It had to be only one other species that I know in this area this time of year - a juvenile striper........measured in at 15". 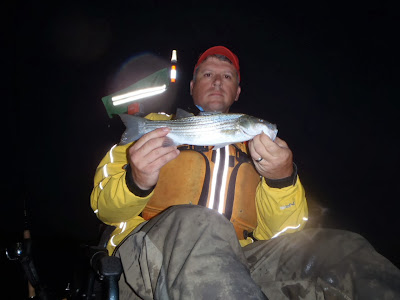 After a quick photo, I made another cast with the Hammershad to continue the slow troll until I made it to my second target area.  After I crossed another hole that rose to a significant flat, the Hammershad was literally hammered and drag started ripping - had to be a redfish.  The challenge in getting this fish in was the incoming tide had picked up in earnest and the winds had shifted and gained in strength.  Now I was battling a strong incoming coupled with a wind that was riding the current as well.  It pushed me directly into the bank and I risked getting hung up on something and losing the fish.  Fortunately, I wrangled the feisty 19" red to the side of the hull right as I reached the shoreline and just lifted him in.  Nice fight but not what I was looking for..... 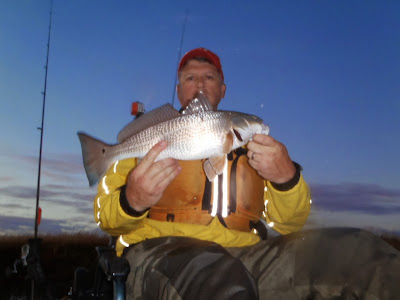 At my second target area, I deployed the trusty 8' YakAttack ParkNPole and waded out onto the flat trying to position myself for any predators schooling and chasing bait.  Nary a bite to be found.  I threw topwaters, suspending plugs, moving plastics.  Varied my retrieves from the normal to the unorthodox just to try and discern the presentation that they were looking for.  Nothing.

I repeated this procedure at my third target area and finally found some baitfish, but I knew it was all for naught.  I had reached the end of my allotted time on the water.  I know if I could have hung around for just another hour or two the bite would have turned on.  I would have been in perfect position to ambush the monster trout I know were staging offshore and waiting for the outgoing to begin.

No worries - I will be back and pursuing that citation.  I will persist, and it will happen.

The lure of the day, as mentioned before, was a Powerteam Lures 3.6" JP Hammershad with a small drop of Hog Tonic.  It is a very versatile bait and can be rigged in a number of ways.  On a standard jighead, as a trailer on a swimming jig or spinnerbait, as a drop shot - the choices are only limited by your imagination.  the beauty of these baits is that they are flat on the bottom.  This is helpful in two ways - one, it helps with skipping under the canopy of overhanging trees, docks and cutting through the wind.  And second, it is awesome as a suspending jerkbait.  Rig it on a 3/0 EWG or swimbait hook with a keeper pin.  The neutral buoyancy of the lure helps it float or levitate in the water and exhibits a slow sink.
Try them out - you won't be disappointed!
Posted by Hanover_Yakker at 4:09 PM