Installing the YakAttack NITEStripe on your kayak

On most kayak forums, one could search the archives and current topics and almost be guaranteed to find a thread or two on kayak visibility at night and the opinions/recommendations for how to make your kayak more visible.  Some people recommend lighting as your primary visibility markers for safety, while others recommend reflective material from piping on your PFD to reflective tape of some type.

YakAttack has recently released the NITEStripe kit to help compliment a kayak's visibility profile under low light conditions.  The kit comes in a variety of colors (red, blue, green, white, orange and yellow) and includes installation tips on the package label, a 24' length of NITEStripe and a perforated package that permits dispensing of the NITEStripe without it coming unwound at your feet. 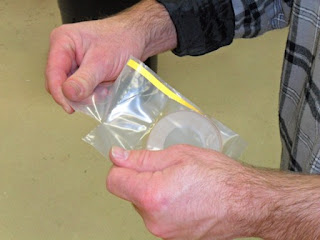 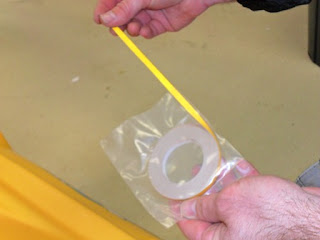 Installing the NITEStripe is a four step process.  Here are the steps simplified:

Step 1 (Preparation) - cleansing the kayak surface with rubbing alcohol and visualizing the layout.
Step 2 (Positioning) - gently place the stripe on the kayak in your desired locations.
Step 3 (Adhesion) - stripe adhesion occurs from applying pressure.
Step 4 (Finalization) - remove the clear protective film from the top of the stripe to complete the install.

Now that is an over simplification of the installation process, but you get the drift.  To install the kit, you must first use rubbing alcohol and prep the kayak surface for the NITEStripe.  A word of caution here - do not use any oil-based cleaning agent to remove any previous decal or sticker residue.  It prevents the NITEStripe from adhering to the kayak properly and will result in a stripe that eventually comes off.  Once you have prepped the kayak surface using the alcohol, begin by peeling back an inch or two of the backing and gently placing the end of the stripe at your desired starting point.  Unwind approximately 18-20" of the stripe, removing the backing and place the stripe where you want it.  A piece of advice here - avoid placing the stripe in small sections of 2-3" at a time.  You will end up with a line that is not straight and will require you to reposition the stripe repetitively. 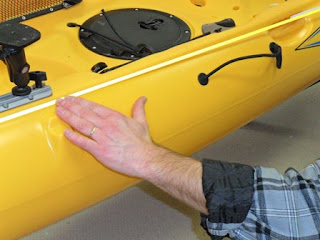 Remember, when installing the stripe to not press the stripe into place firmly yet.  Only after your are certain that the stripe is placed correctly do you move on to the third step of the process.  Once you are comfortable with the placement, apply pressure at the starting point of the stripe using a cloth of some form and run the entire length of the strip using consistent pressure to activate the adhesive properties of the stripe to the kayak. 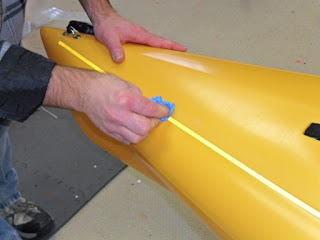 Now you are ready for the final step of the process - removing the protective film.  If you forget this step of the process, you will find your stripe will appear to crack or ripple over time.  This is not an indication that the NITEStripe is defective - it only means you forgot to remove the protective layer of film from the stripe.  To do this, use the edge of a razor blade, utility knife or some other fine point like a needle or even a fish hook (you have some of those right.....) and gently remove the leading edge of the protective film at the end of the installed stripe.  Once you get it started, you can remove it fairly easily. 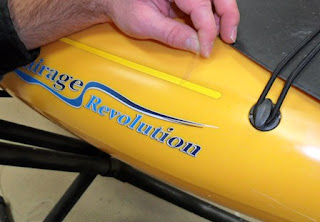 Depending upon your kayak color and the color of the NITEStripe kit you opted for will determine how visible the stripe is under normal lighting conditions.  For me, the Hobie Revolution 13 I own is a yellow color known as Papaya.  I opted for the yellow version of the NITEStripe to keep the visual dynamics of the kayak simple and clean.  What do you think?  Can you find the NITEStripe in this photo................... 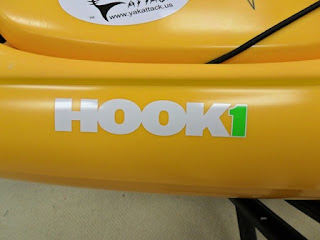 In my opinion, the kit is simple to install - all it requires is a little preparation, some preliminary design and layout considerations, a keen eye and a little patience.  The total prep and installation time for this was 15 minutes. 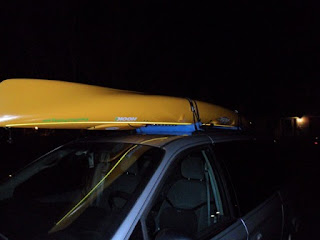 The end result.........increased visibility at night or under reflective light conditions.  I hope you found this tutorial helpful.  While kayakers cannot anticipate the actions of others on the water, we can do our part by increasing the likelihood that another vessel on the water will be able to see us.  It is our responsibility as kayakers to not rely upon just a light to provide some measure of safety while on the water.  Take the time and assess your own respective visibility profile at night and ask yourself the question - can I be seen under low light conditions?

I know my kayak can now thanks to the addition of the NITEStripe kit.  I know it will help me when combined with my YakAttack VisiCarbon Pro light, my headlamp and the reflective piping on my PFD.  To purchase your own NITEStripe kit, head on over to HOOK1 or stop by your local kayak shop, like Appomattox River Company and ask for it by name.

For other tips on YakAttack products, as well as discussions on general kayak rigging, check out the YakAttack Tech Support Forums.

Be safe out there folks.
Posted by Hanover_Yakker at 4:39 AM