Casting for points not quantity...... 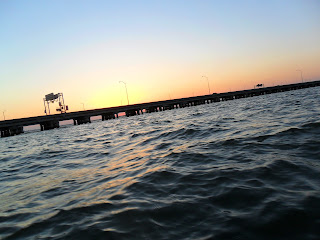 In my travels and fishing trips, I have come across countless wonderful people in the fishing world.  I have had the fortune of being in the company of several renowned kayak anglers: Kayak Kevin Whitley, Drew Gregory, Chad Hoover, Jeff Little, Rob Choi, Justin Mayer, Forrest Short, Tim Morris, Frank Bandy, Marty Mood, Mark Lozier and Cory Routh.  When you get to spend time on the water with these folks, well that's just icing on the cake and a perfect way to wrap up your day.

One great way to expand your "mental angler rolodex" is to participate in Kayak Wars and have a team with other kayak anglers in your region.  For 2012, team LipRippers is comprised of two smallmouth gurus, two saltwater gurus and myself, an angler that fished both fresh and salt.  The team is very Hobie-centric with three of us having them.  One of the team members is Joe who I just met last year while fishing in the area.  I was heading out, and he was heading in.  We shared some passing pleasantries and went out separate ways.  Over the course of the next 6 months, we started to realize how much we fished the same areas, so we thought it made perfect sense to be on the same team this year.

Last night, I was able to coordinate my schedule finally to get on the water with Joe.  He having already fished earlier in the day and landed several keeper flounder was up to the task.  I launched just before sunset, and Joe arrived shortly thereafter.  The goal was to target stripers for some Kayak Wars points and avoid the bluefish if possible.  While waiting for Joe to arrive, I played around with the blues and landed several in the 12-15" range but none that were points eligible (17" minimum this year for blues), so back in the water they went without so much as a camera shot.  I also managed to land a feisty little croaker that thought he was bigger than he truly was but was not photo worthy.  Today was also the first time I was able to get a photo using my GoPro Hero, so I used the timer feature to capture this one.  Most times I am fishing at night and photos are a tad more challenging with low lighting. 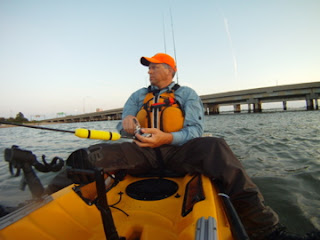 Shortly after 8:30pm, the current picked up in earnest.  It was forecast to be at .5 with winds in the 5-10 knot range and seas at 2-3'.  We knew it was going to be a challenge, but we were still game.  I felt it was the perfect place for Joe to test out a 2010 Hobie Revolution 13 he was interested in.  After the night was done, I think he is convinced that the Revolution is a better fishing platform in the saltwater than the Outback he owns.  Joe and I set off on our quest for points and not quantity from that point on.

Now, this style of fishing can be both fulfilling and frustrating at the same time.  There is nothing more frustrating to me than searching for fish, seeing fish and telling yourself - "Don't cast there, that one's too small......".  If you had told me 5 years ago when I first started thinking about getting a fishing vessel of some sort that I would be refusing to cast to fish I could see, I would have walked away in disbelief after I picked myself up off the floor from my fit of hysterical laughter.

In total, I made less than 20 total casts from that point on for the next 3 hours.  You read that right - less than 20 total casts over the course of the next 3 hours!!!  That's how selective we were going to be, since only stripers over 20" count.  Joe and I split up to stagger ourselves in case one of us spooked any of the fish, the other would follow a few minutes later and try to target them.  After about 30 minutes of this, I had made my way back to Joe and find him hooked up with a monster striper.  He battled that thing for a good 5 minutes with the massive swells and heavy current.  The end result was a nice 34"+ striper........ 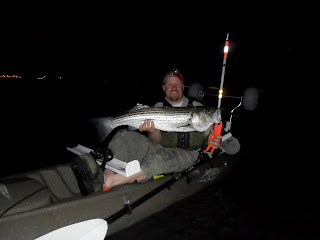 I congratulated him after the quick "glory shot" and headed off on my own search.  We spot hopped for the next hour with only two cast-worthy fish sighted but no hookups.  We decided to try and locate some smaller calmer areas further out, and that is where we started to see a couple more but still no numbers.  While searching, I had one roll up right next to my Hobie Revolution 13, take one look at me, then swim away.  It seemed like he was just curious about the kayak to be honest.  While I watched him swim away, I saw a small swell about 20 feet in front of me.  I fired off a cast and immediately felt some resistance.  At first, I thought I had become snagged, but a couple head shakes later, I found myself battling a chunky striper - my first good sized one in 3 months.  A nice 24" chunk for more Kayak Wars points. 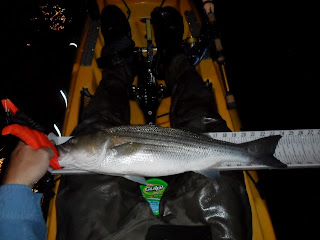 I was using a TFO G. Loomis Signature Series Saltwater spinning rod in MEDIUM power and FAST action paired to a Daiwa Regal 3000 spooled with 30lb. PowerPro hi-vis yellow braid and a 15 lb. PLine Flouroclear leader.  I had a pack of curly tail grubs I had purchased the other day, that I placed into a container of Gulp Alive a few hours prior to launch.  Not really sure it was necessary, since I basically dropped the grub on his head when I made the cast.

We saw a couple more but none were interested in our lures.  It was nearing midnight and by this time, the high tide was nearing its peak and the current was still ripping pretty good.  We decided to head on back to shore to call it a night and spot hop all the way back.  We saw one more cast worthy fish the rest of the way back in but neither could get him to strike.  After a meandering pedal back, we finally made it and called it a night.  I learned that Joe had also landed a 24" striper as well, so we had collectively landed 3 points eligible fish in conjunction with the several flounder from earlier.

We said our farewells until the next time we can get together and headed our separate ways.  By the time I managed to crawl into bed, it was 2:45am, and I was not looking forward to the 5:00am alarm clock.  I ended up snoozing until 6:00am to at least try and gain some manner of usefulness for the upcoming day.  We'll see how that pans out, but in the end it was worth it.  Being selective with your casts is a hard task to do, but it will help you become a more discerning angler whether you fish from shore, a boat or a kayak.

Until next time - be safe, help a veteran, take a kid fishing and get out and get bit!!  Tight lines everyone!!
Posted by Hanover_Yakker at 5:20 AM