I finally found time to complete the second portion of my Lowrance Scupper Kit install and decide where I wanted the power and transducer cables run in the Hobie Revolution 13.  Revo owners understand the challenges of routing wires inside the hull, since there are only two realistic access points - the front bow hatch and the center twist-n-seal hatch.  My biggest concern and what kept me from rushing into this installation was the decision on where to cut the hole for the power cable that runs to the back of the Lowrance Elite 5 DSI head unit.  On a Revolution, there are only so many locations due to how the rudder cables are run inside the hull.  A cut that is too close could result in a frayed or cut rudder cable.

I started off by gathering all the necessary parts and laying them out.  I had the Lowrance Kayak Scupper Installation Kit, the remaining pieces from the Elite 5 DSI package, a wire seal with water tight cap, the RAM mount with the YakAttak 1" Screwball for use with the GearTrac setup and two pieces of STS from Stewart Products.  The STS pieces are going to be used as additional gaskets to help keep water out of the hull. 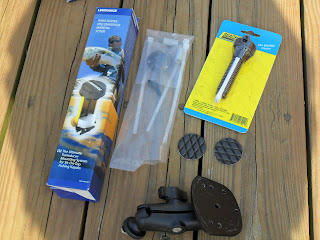 Next, I gathered the necessary tools for the job.  I had my favorite sealant Lexel, some wire ties, a #2 phillips screw driver, a very small phillips head screw driver (slightly larger than a jewelers or eyeglass kit one) a 1" hole saw, en electric drill, a soldering gun and some solder.  Other items I needed were 6-7' lengths of wire for connecting the output leads from the DSI module to the rear battery.  I would later learn that I also needed a butterfly bit and some small drill bits.  It seems that in my haste to get the necessary tools a couple months ago, I selected a 1/2" chuck hole saw versus the traditional 3/8", so I used my butterfly bit and a Dremel tool with a grinding wheel to get the job done still. 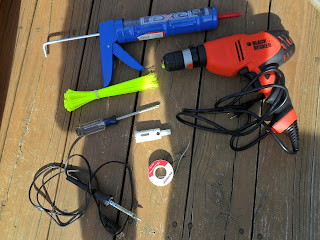 First step was to install the scupper kit.  I quickly realized that the scupper kit is a universal kit and not designed for the smaller scupper holes on a Hobie.  I took a few moments and assessed the situation and decided to modify the lower bracket where the transducer attaches.  If I had opted to leave it as is, the transducer would have been located at least 3-4" below the hull and most certainly would have been damaged from structure on the water, launch/recovery or during loading/unloading from my vehicle.  Too many chances to risk in my opinion, so the modification starts a little sooner than planned.  After all, this is a DIY project right?

The key to this modification is having your kayak hull elevated, so that you can get physically underneath and see the sizing of the scupper hole relative to the bracket.  Make sure you wear appropriate eye protection during this process, since pieces of hot plastic will be flying around.  I started off by rounding the edges slowly until I achieved a snug fit.  After about 15 minutes of trimming and grinding the mounting bracket, I ended up removing the entire flange pieces and even tapering the portion of the bracket housing that fits inside the scupper hole. 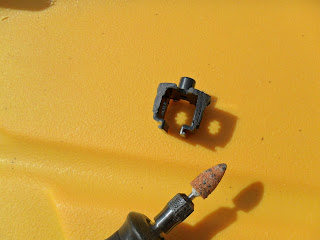 Once I had the proper fit I wanted, I attached the DSI transducer.  This part can be a little tricky, because the  bracket is now so small that you have very little leverage to snap the transducer into place.  I didn't want to risk damaging the transducer casing or nicking the wire with the Dremel, so I left it off until I had finished grinding the excess away.  I later spoke with a member of the Southern Kayak Anglers group and learned that Lowrance is redesigning this piece for models with smaller scuppers.  The second modification to the bracket assembly was trimming the rubber gasket that sits just above the transducer in the scupper hole sandwiched between the closed cell foam insert and the transducer bracket.  I used a pair of scissors, but you could use a razor blade if you so choose.  I prefer scissors, since you have more control and less risk of cutting yourself.  In the end, I was able to install the modified bracket and associated foam scupper plug and rubber gasket and still get the transducer almost flush with the hull. 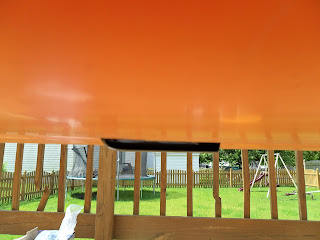 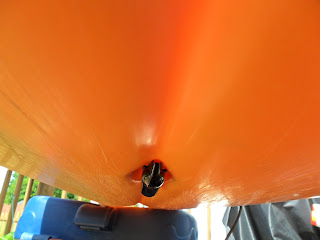 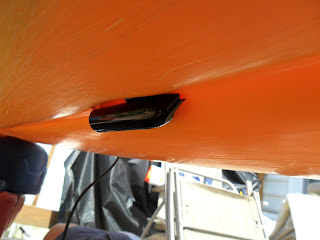 Once you have it trimmed, you can thread the long threaded center mast into the scupper hole and flush with the top of the transducer mounted in the bracket.  The next step is tedious but could be simpler if you have a sharp set of large wire cutters.  The center mast is basically a long, threaded plastic bolt.  You secure the lower portion of the transducer setup by creating tension on the top of the scupper with the retaining plug.  The tension is applied when you thread the small plastic wing nut down the length of the long plastic bolt.  You could snip off a significant section of the bolt, but I didn't have a large enough pair of wire cutters and didn't want to risk compromising the threads on the bolt.  Once you have it threaded on and it starts to become snug, just snip off the excess threaded bolt flush with the top of the tension cap but don't over tighten it.  The weather cap that sits on top of the tension bracket relies upon two small plastic tabs to retain the protective weather cap.  If you over tighten it, the cap will be easily dislodged or may not engage the locking tabs at all.

Next, I provided wire cap from Lowrance has a 1" opening, so once you decide on where you want the wire cap to be located relative to your scupper kit, you will need to cutout a 1" hole to not only route your transducer wire, but also for the installation of the wire cap.  This is another step where the DIY customization was applied.  The provided rubber gasket that marries up to the 3 small screw holes in the wire seal does not provide any measure of waterproofing or keeping water out.  So this is where one of the small pieces of STS came in handy. 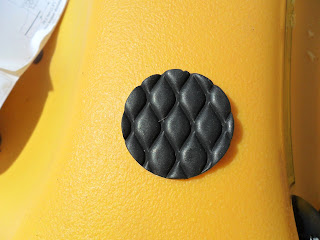 I made an "X" cut in the STS piece, removed the backing from the STS, and adhered it over the 1" hole I had made on the rear side of the hull cross member behind the seat.  Insert the wire cap seal and orient the cable notch toward the bottom to avoid any unnecessary kinks in the transducer wire.  Using the tiny phillips head screwdriver, insert each of the three screws and tightening them down until snug.  When you are finished, you should only have about 3" of transducer wire visible. 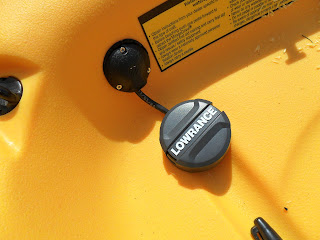 The next step is deciding where you want the transducer and power cables routed in your kayak.  I decided to route my cables so that they came through the hull inside the left hand storage pouch.  The reason I opted for this location is that it permitted me to store the cable when not in use or transport but still allow enough slack to connect to the head unit.  First step is to remove the side pocket and mark your location of where you want the hole.  Then cut a hole large enough to fit the cable end locking collar.  This is significantly larger than the cable itself and was slightly larger than the diameter of the wire seal I was planning on using. 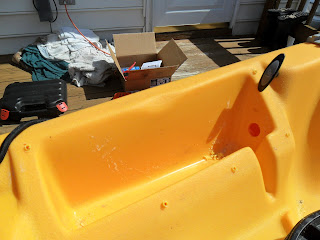 This is the where the second piece of the STS material came in handy.  I made another "X" cut, removed the backing and adhered the STS to the opening.  I routed the cable through the wire seal locking nut and collar then the through the hole.  Next, I placed some Lexel on the back of the wire seal flange and on the locking collar before tightening down.  I oriented the wire seal at the 11 o'clock position to help with how I wanted the cable placed when attached to the head unit. 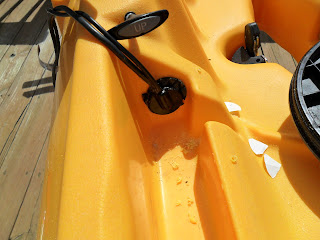 Before reattaching the side pocket, I placed a small dab of Lexel in each of the six mounting holes.  I then reattached the side pocket making sure to only hand tighten the screws using the #2 phillips screw driver.  The end result is a well-concealed cabling solution that is both stealth in appearance yet protected from excessive wear yet still retains the original functionality of the side pocket. 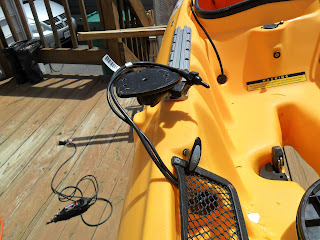 The final step in the process is attaching the DSI module and power cables.  This part of the install was a little troubling for me for two primary reasons.   One, the DSI module attaches via a very small 18 gauge male/female wire connectors - very frail in my opinion.  Two, there are no attachment points inside the hull of the Hobie Revolution.  All of the mounted options on the kayak where screws are utilized are inside of protected molded housings (not a bad thing mind you just inconvenient for what I need).  In the past, I have had a fish finder install fail on me over time due to corrosion on the terminal connections from being in the salt water so much.  So, I opted to seal my DSI module and the junctions of my power leads inside of a small dry pack I had lying around I wasn't using anymore.  I also added some dielectric grease to each of the connections before sealing the bag.  For now, the bag is resting inside the hull beneath my twist-n-seal hatch up front until I can come up with another solution. 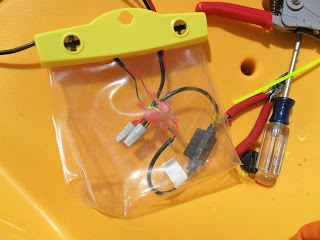 The last step was connecting power.  I am possibly the world's worst soldering fool, so it is never pretty.  I don't know what it is, but I couldn't solder a connection cleanly if my future fishing success depended upon it!!  Anyway, I did what I could and placed some dielectric grease just as a precaution prior to using heat  shrink over the connections.  I left enough length on the cabling so that I could remove my rear gear bucket and still not worry about breaking or crimping the wires accidentally. 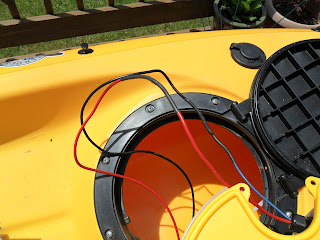 All that's left at this point is to get it on the water and test it out.  On my next outing, I will make every attempt to capture some imagery in varying light conditions for you folks to see.  I hope you enjoyed this tutorial.

Until next time, get out and get on some fish, tight lines, and always leave the water cleaner than when you arrived.
Posted by Hanover_Yakker at 7:30 AM