Had a chance to hit the water for about six hours today on my day off for a change.  As many of you know here in VA, the last month or two has not been the best on Fridays for my fishing habit.  When the rain cleared early in the morning and the clouds started to roll away, I loaded the new Pro Angler 14 in short order and picked out four rods to use on the day.

On the way to my target location for the day, I stopped off at Appomattox River Company to pick up my 2013 Hobie Fishing Team Pro package.  Boy, Hobie really outdid themselves this year.  Last year, I was just happy to get accepted onto the team and was happy with my hat and shirt.  This year, they setup the team members with three different hats, three different shirts, some more stickers, a Hobie BUFF and some other Hobie logo accessories. 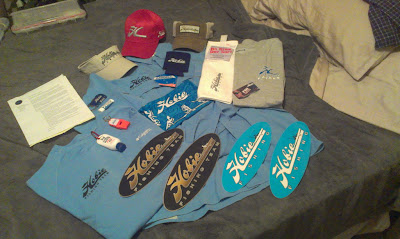 I figured what better way to break in the new swag than to hit the water and get some fishing in.  A short drive from the store, and I was on the water in no time.  In keeping with my goals for 2013, I grabbed my new crankbait rod and started slinging the good ole L7 Square bill for a little cranking action.  I also slipped in the new PTL Swinging Hammer, the PTL Sick Stick and a SWL Quick Strike Spinnerbait.  The winds were still blowing in earnest throughout the afternoon but nothing like the last month or so.

The day was tough going with nary a bite to be had on the first two ponds I targeted.  I fished every square inch of those ponds and didn't even get a single hit the entire time.  I knew my fishing window was coming to a close if I was going to make it back home in time for dinner with the family.  So, I made a tactical decision and decided to hit one more spot that usually has some hungry bass even if they aren't the largest.

A few minutes later and I was back at it slinging the blue chartreuse squarebill crankbait.  It wasn't long before I had two aggressive strikes but no hookup.  I slowed the retrieve a little more and paused it right over a laydown and BAM - fish on!!!  Nothing to brag about but a fish is a fish on a tough day like today.  This one was only 10" on a good day.  A follow up cast to the same spot with the same pause and another fish hits it.  This one was a little better measuring in at 14". 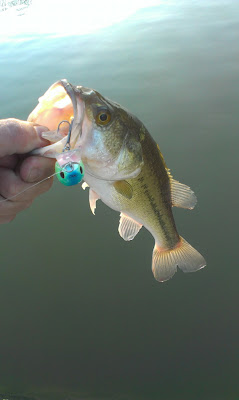 Still not the size I was looking for but at least I'm getting hits.  Another 30 minutes on the water and ended up landing seven bass in total in a little under 45 minutes at this spot.  The fish were so aggressive that I even had a couple of dinks that took a swipe at the squarebill and got themselves hooked in the process.  I think they had great expectations for later in life.  This one was all of 7" on a good day..... 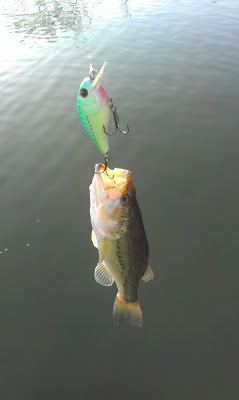 Not the best day by far, but seven fish in under 45 minutes works for me.  I'll be hitting the James River next weekend for the annual Shad Shootout to benefit Multiple Sclerosis.  I'll be taking my son with me for that one, so he'll ride shotgun in the back of the Pro Angler.  Hopefully, he'll get into some shad on his ultralight.   What fun that should be!!!

Until next time - tight lines and be safe!