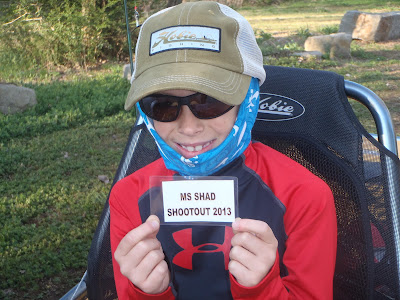 This past weekend, my son and I participated in the annual Shad Shootout to benefit Multiple Sclerosis here in Richmond, VA.  This event would also be the first time my son had ever been in the new Pro Angler 14, so he was more than a little excited to say the least.  I made a run to Green Top and picked up a handful of shad darts in various colors and a few tandem rigs with flutter spoons to use for the event.

I had never fished for shad before, but I had caught a few while fishing at the Hampton Roads Bridge Tunnel in the past while chasing light line stripers.  I knew how much fun the fight was with these fish, so I wanted my son to experience the thrill and excitement of catching a "poor man's tarpon".  We launched from Ancarrow's Landing on the James River with my son riding shotgun in the rear of the Pro Angler.  We made our way up river to a couple spots that my friend Rob Choi had suggested during the previous night's captain's meeting and how-to seminar.  When we failed to get any action, we moved upriver further just below the 14th Street bridge area and anchored off into a promising looking spot.

It wasn't long before my son was hooked into his first shad.  He was using his own rod and reel and slinging one of the tandem rigs with a dart and flutter spoon combo.  A short fight and his first ever shad made it's way into the Pro Angler.  It was a 15" Hickory Shad and my son was amped up for another one.  Before I could even take the picture of it, he had already recast and was hooked up again.  Such was the story for the next two hours as my son ended up landing 15 shad in total and a couple smallish white perch. 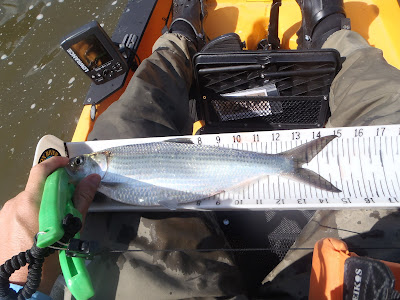 After a while, he took a break, so I picked up my rod and started fishing for a bit.  I was armed only with a shad dart, but I managed a few 15" Hickory Shad myself, and a few more white perch as well.  The single shad dart was not as effective on this day compared to the flutter spoon.  One of the challenges in fishing rivers is underwater structure changes and moving cover.  These areas will snag your lures quickly and can result in the loss of some tackle.  On this day, it was no different.  My son snagged and lost three of our four tandem rigs and wasn't too happy about it.  When I tied on the last tandem rig I had, I let him know that if this one was lost that we would have to use just the darts from that point on.

He didn't seem phased as he slung the last tandem rig out into the flowing James River.  A few seconds later, I hear him eschew out sounds of amazement as he screamed , "WHOA!!!!  Dad I think this is a bigger one!"  I just reeled in my line and let him fight the fish on his own.  I didn't even have to tell him to ease the fish towards us.  He fought the fish beautifully and played him out right next to me, so that I could land him.  He was right.  It was much bigger - 19 1/4" to be exact and an American Shad at that! 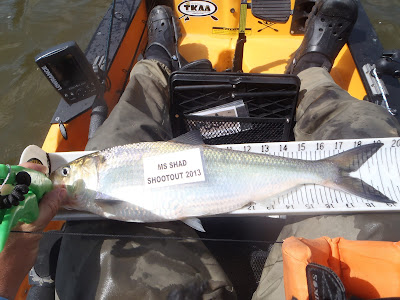 After he landed that one, he put the rod down, took a seat and started shaking his hands telling me, "Man daddy, that fish hurt my hands he pulled so hard!"  Love it love it love it!!!!  I can't wait to see what happens the first time I get him on a big flounder, redfish or striped bass.  That boy's going to be pumped full of adrenaline when he gets to feel that sensation and fight.

After he sat down, I fished for a bit and managed six more perch including the best one of the day for us - an 11 1/2" chunky little fighter. 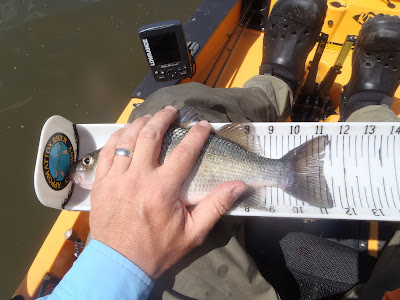 It was a great day on the water for a good cause.  Total monies raised on the day were $1000!  It's an awesome event that my son has already clearly stated that we must do this again next year.  He quickly added that he would like to go shad fishing again this year though and not have to wait until next year.  That's my boy!!!  All fish were release unharmed and ready to fight again another day.

Here's a quick video I made for some of his fish catches.  His reactions are priceless and really show how much fun he had.  Enjoy!

The shad bite is still on, so if you have an ultralight rod and reel and some shad darts and flutter spoons, head on down to the James River and try to get in on some of the action.  It's a blast!!

Until next time - tight lines and be safe!!!
Posted by Hanover_Yakker at 4:54 AM