In honor of the pending Father's Day this weekend, I promised my son a day on the water in my kayak.  The goals for the day were:

1. Have fun.
2. Fish if possible.
3. See Mother Nature in her splendor and natural beauty.
4. Make time to play on the sandbar.
5. Teach my son the importance of leaving the water cleaner than when you got there.

I decided to let him sleep in a bit and head down mid-morning.  By the time we had arrived and launched, it was around 10:30 and the high tide transition was just about ending.  We launched from Crab Creek and at the mouth of the creek we turned right, and Jacob cast out his jig head rigged with a Smelt Gulp!. I paddled slowly letting it bounce along the bottom slowly - 5 minutes later..... 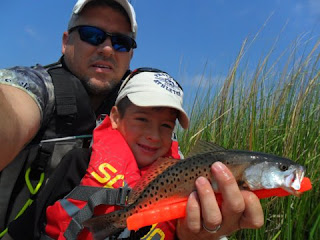 His first Speckled Trout - a nice little 12" spike. The photo lends itself to how little interest he had in holding this fish for a glory photo. This little runt was flopping all over the place. He had apparently been caught before by someone who knew little of how soft the mouths are on specks. You can see in the photo how much of the Fish Grips jaws was able to fit clean through without touching any of the lip.

We paddled back into Pleasure House Cove and saw plenty of mullet busting the surface making some nervous water, but we got no takers. We saw a huge flock of White Herons working the shallows. We also saw countless turtles in the water but could not manage any photos due to their spookiness.

Anyway, the tide started to shift into a falling tide, so I turned the yak a bit and let the tide do the work for us. Jacob started fishing again and so did I. I felt a "machine gun" of taps on my bait with some serious pullage. I thought that it didn't feel right, so I just created tension and kept reeling slowly - end result a fat blue crab had a gorilla grip on my jig. He let go as I was about to net him for a photo. He was huge with beautiful with bright blue coloration along his legs.

We drifted over towards Keeling Drain cutting through some of the creeks in the grass. The future redfish population looks promising if the number of fingerlings I saw make it to maturity - thousands of them today. By this point the water starting getting shallow, so I promised him we would stake out on the sandbar and let him play a bit before calling it a day.

While he was playing in the mud/sand building castles and such, I hooked into a runt 10" flounder that decided laying on the HOOK 1 Hawg Trough was too much to ask, so he flipped sideways and bailed out of the boat back into the water. About 3 casts later, I get more "machine gun" nips, only this time it was a smallish croaker.

We pulled up stake and walked down the sandbar to the end and setup shop again. He wanted to look for shells and play on the sand, so I let him. I made a cast up into the outgoing tidal flow and allowed the Gulp! Smelt to work slowly along. The rod almost lept out of my hands as I hook into something that has a bit more size to it. Not knowing how much of the pullage was tidal flow versus fish, I just maintain leverage and continue to reel smoothly. At first, the fish was coming at me right side up giving the appearance of a clear-nosed skate, but then it flinched and turned sideways. Flounder on!!!

As I got the flounder to the sandbar, he went ballistic and started flopping and flinching all about making it very difficult to get the Fish Grips on him. I eventually got the mouth open - end result? My first nice flounder landed this year at 17.5" (Kayak Wars points baby - finally: Go Team LipRippers!!!) 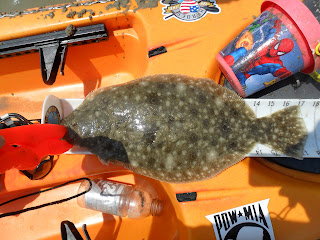 Notice the G2 bottle - this was just a sample of the trash we collected - one that he spotted!!!  We ended up with a flip flop, a couple bottles, some random trash and some line in the garbage bag I threw away back at the launch.

Shortly after catching this one, the tide went slack, and I knew the day was done. Lynnhaven can shut off like a light switch some days. So, we passed the time by letting him get some swimming accomplished in preparation for his refresher swimming lessons starting next week. 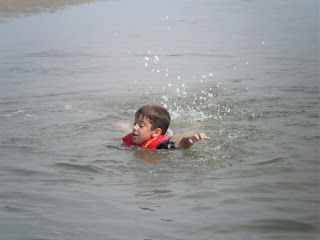 We also managed a couple photos of the Lynnhaven scenery during a falling tide..... 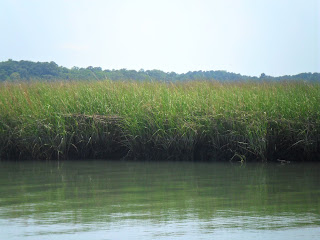 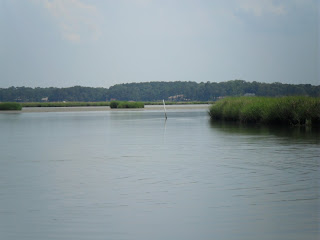 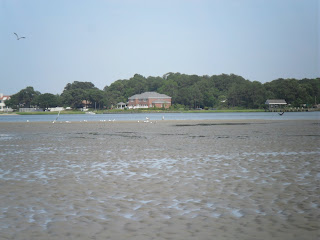 All in all a great day of fishing with my son - 1 speckled trout, 1 croaker, 1 blue crab, 2 flounder and memories hopefully he will not too soon forget.
Posted by Hanover_Yakker at 8:25 AM