In an effort to make my trip reports simpler, I am consolidating my other blog dedicated to salt water into this one, so pardon the dated posts that are about to follow..........

Happy belated Valentine's Day to all of you.  Hope you had a safe holiday.  I traditionally head out every week to wet a line, whether it is from the banks of my local horse pond or from the comfort of my kayak on some body of water.  My planned trip for this past Friday was canceled due to a sudden temperature drop and a splitting headache, so I decided to take Monday off instead.  The 60-70 degree temperature wasn't too bad of an incentive either.

On Monday, I ventured over to the pond on the river and fished with a buddy of mine.  The weather forecast was not promising for the entire day with forecast estimating afternoon winds at 30 mph+ with gusts of 40+.  We got on the water around 9am and found the pond to be relatively quiet with no significant traffic.  This time of year can find the pond area with boats of various shapes and sizes stacked almost on top of one another.  The myriad of live lines and anchor lines turns this area into a minefield when trying to position yourself.

We started working a new spot we had not tried before and learned that the fishing was going to be slow today.  We spent the better part of 2 hours working the spot over with a variety of presentations and lures to no avail.  The winds made boat positioning near impossible.  I think I spent just as much time paddling and positioning as I did fishing.  As the day wore on, the action and bite continued to be slow.  Others in the pond area were experiencing the same challenge.  We witnessed only a handful of fish being caught.

Around the lunchtime hour, I got my first fish on a sea shad impersonation, a short one around 14".  Shortly thereafter, my buddy landed a good 20+ inch trout that was released for another day.  Then what little action there was slowed again, and no one was getting any bites.  Almost all of the big boats left, leaving just three kayakers and two boats.  Around 1:30pm, the wind was getting pretty stout, so we both beached the kayaks for a stretch and decided to wade fish for a bit before calling it a day.  After 15 minutes of casting, I ended up hooking into something that put a nice bow in my spinning rod.

For those new to the pond area, the tannins from the nearby swamp and all of the dead wood, stain the water to the point that visibility is limited to about 4-6 inches.  Whenever you hook into a fish, you never really know what you have until you get it into the boat.  After about a 30-45 second fight, my fish surfaces and is much bigger than I had thought.  I was able to get the fish over to my kayak just as the 10lb. flourocarbon leader broke.  I was able to get the Fish Grips on and positioned the fish on the measuring board - 20" on the nose or tail as it were. 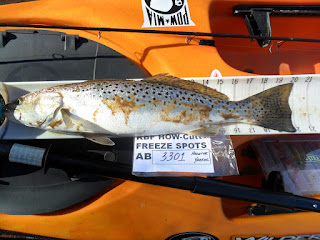 Shortly after that, the winds started to pick up even more, and we decided to call it a day.  We landed three fish between us, had several more tease the baits with short strikes and nibbles.  All in all, a good day on the water, albeit windy.  The wind was so strong at times that the PFDs and paddles acted as sails and pushed us all over.  Next time, I am bringing a sturdy anchor to at least give myself a chance at holding a position for more than 5 seconds.
Posted by Hanover_Yakker at 8:26 AM