A Beautiful Day but nothing overly Speck-tacular

Today was a day dedicated to chasing Speckled Trout.  I was joined today by fellow KBFer Simon (aka SimonSays) to hit the Back River. Prior to the outing, I passed along the tips and pointers that had been passed on to me from past outings with other members both from TKAA and KBF.  I launched at 5:15am from a launch off of Poquouson Ave. and Simon joined me at 7am from Messick. We met up and started our search. Finger Mullet were busting the surface all around us, but we had no luck early on. A closer look revealed that Ribbonfish and juvenile Striped Bass were primarily chasing the Finger Mullet with an occasional speck thrown in for good measure.

I was throwing everything I had at them today and not getting so much as a single serious bite.  I mean, I started with a top water mullet impersonation - not even a sniff or short strike.  I switched rods and started working a crab impersonation plastic - nothing.  Switched rods again and started casting a Mirrolure suspending twitch bait.  Still nothing.  Switched rods and tied on a Gulp! Swimming Mullet.  I even stood up at the mouth of the coves and attempted to see what was going on in the relatively clear water for any signs of activity - nothing.

Time for Plan B, I told Simon to position himself outside of any main creek mouth and cast his soft plastic back into the creek.  I did the same and quickly landed the first speck - a 10" spike. A few minutes later after a few subtle hops, Simon lands his first trout - a spike at 12". Alas, he had to go back and get a little bigger.

We floated along with the current but not much else happened. As Simon was about to leave, he started trolling and ended up with a juvenile striper in the 13-15" range. It was getting close to our cutoff time, so we parted company and headed back to our respective launches. As I am trolling along slowly, my rod takes a sudden bend and starts shaking - fish on! Another spike trout.

I start my slow drift again, and a firmer strike happens. This one felt a little better. A short fight lands me the first keeper size trout of the day - a nice 15 3/4"" speck. I call Simon on the phone in hopes of catching him before he left for home. Just in time! I ask him to meet me at my take out if he wants it. As I am making the turn for my take out, the rod bends for a third time on the drift back. This time, it is a juvenile 15" striper.

All in all not too bad of a day, but the better trout eluded us today. Here are a couple of the best photos from the day..... 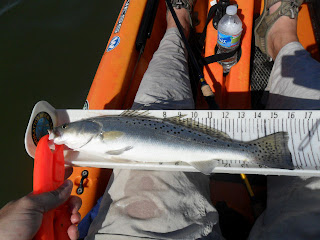 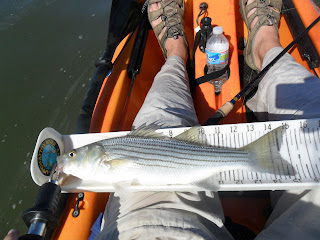 Posted by Hanover_Yakker at 8:56 PM