So, today was the Columbus Day holiday and what better way to spend a holiday than to take a day off from work and take my son fishing, since he had the day off.  We loaded up mid-morning, since there was a full moon last night, and headed out in search of some fish.  I originally planned on hitting up Lynnhaven or possibly Rudee, but I wanted to avoid any potential holiday traffic at the tunnel, so I stayed north of Hampton and ventured out onto a tributary of the York River.

Our original plan was to hit the creek mouths on the falling tide and search for some specks.  On the second cast, I hooked into a spike trout right at 8" that has some nice fangs but alas was a runt nonetheless.  Not a good sign........we paddled out anyway,  We spent some time bouncing jig heads along the bottom and quickly landed another salty creature - a blue crab.  Doh!!!  Not exactly what I was looking for.  Keeping an eye on the depth finder, I noticed that most of the fish were suspended about 4' below the surface but not tightly schooled up.  More like a random pod of fish with only 3-4 spread out in various spots all over the river.

I took a moment to switch out our lures to a Bass Assassin in Sea Shad color.  I threw mine out to bounce along slowly as I showed my son how to rig a plastic shad on a jig head.  As I was showing him how to make sure the back and body was straight on the hook, my rod tip does 2 quick bounces then a straight pull and started moving.  I grabbed the rod quickly and gave a sharp rod set - FISH ON!!!  The fight lasted for over 2 minutes with the fish pulling drag every chance it could.  This fish fought like a striper, which have been known to show up all over the York.  Something didn't feel right though - I got it to the kayak and it rolled.  Was it big Croaker?  It only looked a shade over 12", so it could be possible.  There are some horse Croaker in the York as well.

Not to be - alas, a dang catfish!!!  I used my new 1900 series Leverage Landing Net to coral this feisty whisker kitty and in the kayak she ended up.  After a couple minutes to get things organized, I managed a couple pics. 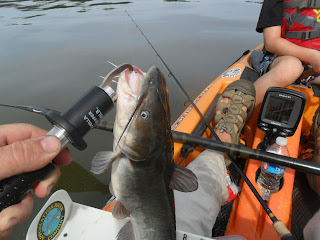 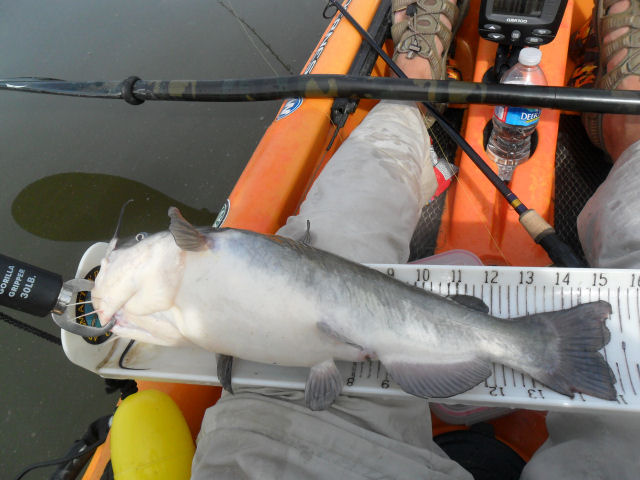 This sucker was chunky!!!  Look at the girth on this sucker.  I bet those would be some tasty filets, but I released him back to the water.  Not our target species for the day.  After that, nary a bite was to be found.  However, it doesn't mean the fun ended there by any means.

We kept paddling around and explored a couple more creeks at low tide.  I had the fun of showing my son Fiddler Crabs for the first time.  He kept an avid watch on the shoreline looking at the now exposed mud banks and the holes that the fiddlers call home.  Every time he would see one, I was greeted with a loud "Daddy look - there's another one!!  They are funny daddy!!"  The best part of the day was when we got to watch a bald eagle soar from his lofted perch right off the bow.  We watched in awe as he soared skyward and land gently and confidently a few hundred yards away.  Still visible, but concealed to the naked eye for those that did not see him land there.

We kept paddling about watching the herons chase mud minnows in the shallows for a bit.  We even saw a species of fish I am clueless about and can only describe.  The fish would literally poke its head up out of the water look around then disappear just as quickly.  The fish looked to be a muted grey with black blotches.   Strange but cool.  We reached the end of our initial drift/paddle and made the turn for home.  We passed by the eagle's last know perch.  Right as I opened my mouth and said to my son, "Oh shoot buddy, I think the eagle has flown away", he took flight from his hidden perch and soared yet once again in front of us to stare in awe and wonder.

I wonder if Christopher Columbus had the pleasure of experiencing a moment like this as he ventured into the New World so long ago............
Posted by Hanover_Yakker at 4:57 PM