No Briery beasts yesterday for me......

Sorry for the delayed report - it was a slow day as I figured it would be. I managed some bites early on due to a lingering fog that had moved in overnight and lasted through 9AM. 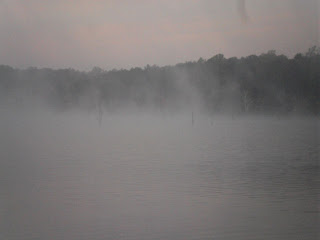 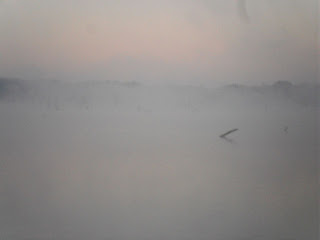 Nothing of any significant size to report unfortunately for my partner AJ in the KBF OTBD Challenge, but it was still great getting out on Briery for the first time this year. 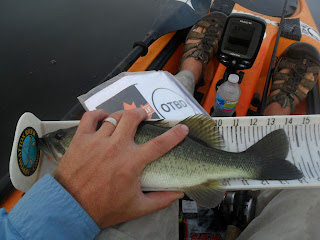 One of these days, I will hook into one of the famous Briery beasts, but alas it was not to be yesterday. Maybe next time. Spoke to a few others that were fishing there the last few days, and they also confirmed the bite was off.  Most folks were catching the fish by drowning large minnows in 9-15' of water on a slip bobber.

Sorry, but I am not a fan of watching a bobber for 8 hours, so I spent most of my time paddling around checking out shoreline structure and shallow coves. Water temps peaked at 74 by mid-day and were in the high 60's at launch even with air temps in the high 40's.

All bites and landed fish were caught on my favorite lure - the Stanley Ribbit, by working pockets in the pads, edges of the pad line and between the nooks and crannies of visible structure of the tree tops.  Both fish were caught in 3.5' of water early in the morning before the fog wore off. I went against my normal mode of minimalist, because I wanted to avoid changing up presentations on each rod. I carried 5 rods - 1 frog, 1 jig-n-craw, 1 SWL Clacker Spinnerbait, 1 Castalia Bombshell Turtle and 1 Shakey Head that also served as a fluke rod.

Could not establish any pattern other than the fish were holding in 5-9 feet of water and not active. The bass were schooled up with the crappie and holding tight to cover. Even dancing a fluke or dead sticking had no reaction at all. Near mid-day, the bite appeared to turn on somewhat again, because I was seeing surface strikes all around the wind-blown shallow coves, and I was getting consistent hits on the frog but they were all misses.

Still fun to get out and spend some quality time on Briery doing some recon for a potential spring time outing.
Posted by Hanover_Yakker at 4:26 AM