The Pond Around the Corner 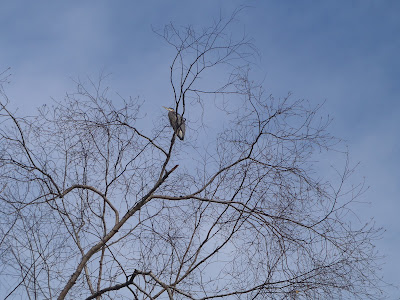 On my normal Fridays off, I try and seek out a new challenge whenever possible.  Sometimes, that equates to a trip down to the peninsula to satisfy my longing for the saltwater.  Other times, as is the case recently, I try and stay more local and save some money on gas.  Such was the case this past Friday.  I decided to try my luck at a nearby pond that has produced several 20"+ largemouth bass in the last couple of years, including a couple of citations by another individual that bank fishes there frequently.

I knew the trip would be a short one, so I wasn't too anxious to venture out into the near freezing air temps at first light.  By 8:30am, the sun was over the horizon, and I had made my way to the pond to begin unloading my gear in spite of the temps hovering at 39 degrees.  I launched into a slight breeze and the echoes of red tailed hawks and blue herons squawking amongst the barren trees that encased this little body of water.  The water here is always a little on the murky side and is very shallow.  The deepest hole in the pond is barely over six feet, but there are numerous lay downs and overhanging trees to provide ambush points for the resident bass, as well as a few scattered rocks affording the bank anglers a place to sit and fish from.

I had pre-rigged three rods for the day: one casting rod with a double bladed spinnerbait, one casting rod with a square-billed crankbait, and a spinning rod setup for small profile soft plastics.  I could see some surface activity from small shad busting about, so my original thoughts on using a spinnerbait and crankbait could pan out.  The thought process was to troll the crankbait and spinnerbait back and forth across the pond to try and locate the fish, but when every cast was returned with fouled treble hooks from the leaves that now inhabit the subsurface of the pond, I knew that approach was futile.

I also abandoned the trolling/slow rolling spinnerbait approach when I noticed that the pond was actually down a couple feet leaving even the deepest hole only a couple feet deep.  I switched over to the finesse setup and rigged up a PowerTeam Lures Craw D'oeuvre in Deep Melon Pepper.  I rigged it on a 1/4oz. Confidence Baits Draggin' Head to try and eliminate the chances of the hook getting fouled up on the leaves lurking beneath the surface.

I pedaled about the outer edges of the shallow pond working every lay down, shoreline pocket and overhanging tree I could find.  The shoreline here is covered in various thickets and grassy outcroppings, but the drop off from the bank is a nice holding spot for fish.  Although it is only a couple feet deep, the subtle depth change holds fish and is very unpredictable from day to day.

After an hour of working the pond over, the air temps had crept into the high 40's and actually became comfortable to fish in given that I was layered up fairly well for the cold, but I knew only the tug of a bid ole' bass on the end of the line would be the only real cure to chase the cold away and warm me up.  On my second circuit of the pond, I switched up my casting approach from "dock shooting" or sling shot casts under the overhanging brush, to casting ahead and working parallel to the brush.  That was the ticket, because within 15 minutes, I had landed the best fish on the day - a fat 19.75" largemouth!! 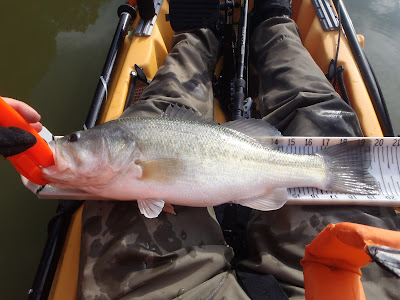 After I calmed down from the massive adrenaline rush of that lunker, I focused on the next set of overhangs ahead of me.   After not feeling another bite for 30 minutes, I was beginning to wonder if any other fish were awake.  My concerns were quickly sated and yet extinguished in a matter of 3 seconds when an even larger bass engulfed my Craw D'oeuvre and started ripping drag instantly but came unbuttoned almost as fast.  Both stunned and torqued at the same time, I knew when the fish hit it that it was going to come unbuttoned.  She had hit the lure directly underneath of me on the port side as I was lifting the bait out of the water and took off to the starboard side of the Hobie catching my line on the bow handle.  Oh well, at least I know she's lurking in the shallow depths and right where I had seen a similar fish caught just a year ago.

The rest of the morning was uneventful save for a brief shoreline stint socializing with a couple of dogs that wanted to check out the Hobie.  Without a bite to be found, I spent several minutes doing some cleanup of various bottles, abandoned corks and bobbers and countless yards of line hung up in the overhanging brush and trees.  At one point, I found a tree that had line strewn throughout with no less than three different soft plastics (a lizard, a twin-tailed grub and a chigger craw) hung up.  I was only able to get to one of the three, but to my surprise I found one strand of line hung up near the shoreline and was quite surprised to find a brand new Blue Fox Vibrax spinner still attached. 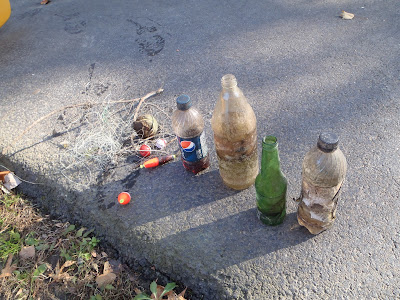 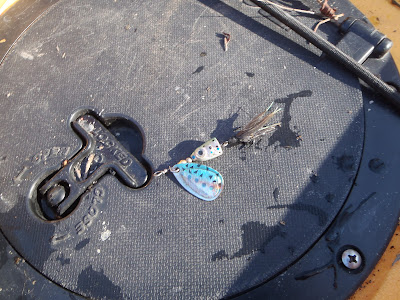 It amazes me how inconsiderate folks can be of their surroundings sometimes.  It makes me wonder what their households look like or what other things they simply abandon without care in their daily lives.  The next time you are out in nature, please take a moment to look around and see if you can leave the area a little cleaner than when you arrived.

Here's a quick video of the day's highlights.

Until next time, tight lines and dress appropriately for the cold air and water temps.
Posted by Hanover_Yakker at 4:30 AM