This past weekend was Veteran's Day weekend and is always a little bitter sweet for me, having served in the armed forces; fought in a war on foreign soil; and then being RIFed without so much as an option to stay in.  A day doesn't pass that I don't think about my time in the service, eight years to be precise, and where I would be today had I had an opportunity to stay in.  That thought quickly fades when I realize that there is always a plan for your life.  Had it not been for the actions of the RIF initiative almost 15 years ago now, I would have not met my loving wife nor had the pleasure of raising my son.

Fast forward to this past weekend.  You may recall that my Friday was spent with my buddy Darren chasing anything that would bite when we went a did a little November Creekin'.  Saturday was a day reserved for the family, so we spent a good portion of the day in Ashland at the annual Train Day.  When Sunday rolled around, I had committed the better portion of my day to the Central Virginia Heroes On the Water chapter.  We had a table and display setup at Applebee's and spread the good word about HOW on Veteran's Day.

When Monday rolled around, the company I work for observes Veteran's Day on Monday, since it fell on a Sunday this year.  That means, I had the day off, and what better way to spend your day off than on the water!  So I loaded up my gear and set off for Bear Creek Lake with the intention of using some of the new soft plastics I had just received from the good folks at PowerTeam Lures.  I had three rods rigged - one with a Finicky Tickler 5" finesse worm rigged on a Confidence Baits Draggin' Head; another rigged with a Deep Melon Pepper colored Craw D'oeuvre on a shakey head and the same colored Craw D'oeuvre rigged as a trailer on a silicone skirted football jig.

I launched in what many would call ideal conditions - a slight breeze with a slightly falling barometer as a storm front approached, that is until I made my first cast.  That was when Mother Nature woke up and realized I was on the water.  She must have thought I was going to be down on the peninsula chasing Tautog at the bridge tunnel or speckled trout in the river, because she was a little late this morning.  As soon as my first cast hit the water, I could see the approaching wind as it churned the water surface down lake.  I didn't have to wait long before the brunt of the wind slammed me pretty good making any long, perpendicular cast towards the bank basically useless.

I spent the better part of the morning hugging the banks and targeting lay downs and submerged brush piles while fighting the wind to establish good casting angles.  But every time I would fire off a good cast, the wind direction would swirl and change on me rendering my kayak position and cast pretty useless.  Even if I had a strike, I would have missed it with the slack in the line the wind was creating.  I changed tactics and sought out coves with deeper cuts and troughs to hopefully negate some of the wind effect on my casting angles.  When the winds consistently played havoc with my casts, I switched the finesse worm out for a Kitchen Sink colored Craw D'oeuvre on the Draggin' Head. The first cove was too exposed and shallow, but the next one surrendered the first fish of the day, a chunky and feisty little 14.25" largemouth that hit the Craw D'oeuvre as I worked it past the base of a large lay down.

The next hour was fairly uneventful save for the clean up I was doing rescuing abandoned bobbers and hooks left snagged on various exposed tree limbs.  Fighting the wind in open water is a bit frustrating, and can make you question why you are even out on the water to begin with.  I found a large sheltered cove and worked it over pretty good for the next hour hitting every nook and cranny I spotted, then worked the deeper holes back towards the shallows until I found my next two fish of the day - another  spunky 12.5" runt largemouth and of all things a 20.5" channel cat.  When the cat hit the craw and took off, I knew it wasn't a largemouth.  The tell tale "catfish death roll" was all I needed to feel to confirm my original thoughts.  It was a decent fight but not what I was targeting to say the least. 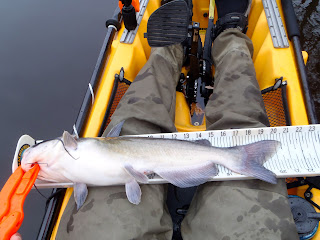 A quick drift to the other side of the lake found me positioned parallel to a sheltered bank that had produced on several occasions in the past, so started working the lay downs with no success.  My last cast in the area was made parallel to the bank about 30' in front of me.  A couple of subtle hops and the "double-tap" bite was the feedback I had been searching for all morning.  A quick reel down to gather up the little bit of slack followed by a sharp vertical hook set and the fight was on.  Finally - a fish worth wrestling with.  A short 30 second fight and the best largemouth of the day was boated - a chunky 17.25" largemouth. 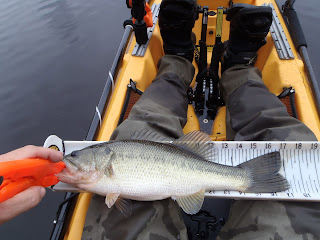 I worked a couple more lay downs but the winds picked back up again rendering even the shortest of casts fairly worthless yet again, so I moved back into a real shallow cove knowing that the only fish in there might be either carp or non-preferred size bass (ie: under 15").  I felt a subtle hit in the deepest part of the cove, but no take.  A second cast to same area was met with better success and a spirited 12" largemouth was landed as a Blue Heron voiced his displeasure as he flew past.

While the day wasn't a total loss, it failed to produce quality fish in the numbers I had hoped for given the conditions I was fishing.  Of the three combos I had taken on the water, the only one that was usable given the windy conditions was the spinning combo.  My other two casting combos were useless with the winds that were up and blowing.  Switching out the finesse worm for the Kitchen Sink colored Craw D'oeuvre was the smarted move of the day.  It added just enough weight to the presentation to facilitate longer and more accurate casts while not compromising the action of the lure.

I must have made over 300 casts on the day, because my arms were tired!!  The Craw D'oeuvre was a success in my opinion, and I can truly say that I literally threw the Kitchen Sink at them for a change!


Until next time, tight lines and dress appropriately for the colder air and water temperatures!
Posted by Hanover_Yakker at 5:09 AM