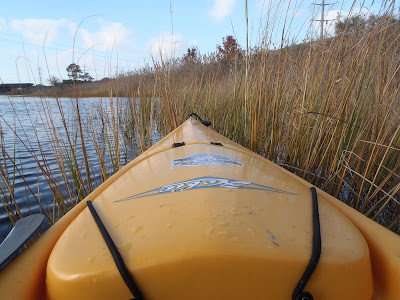 .....especially when you are hunting for big speckled trout.  The ER in this case is the Elizabeth River, a tributary of the James River and ultimately the Chesapeake Bay.  The water temperatures in this river are warmer than the water downstream due to the water discharge of the local power plant.  Now, before you start planning your outing, you need to take a couple of things into consideration.  First, the area is not a secret, so you are going to have to be cognizant of the other watercraft (both powered and non-powered).  Second, the available launches are crowded and can fill up literally minutes after first light.  Remember, most of the launches open at first light and close at dusk, so plan your trip accordingly.

A common misconception about this area is that you have to sit in one of two spots - aka The Pond and the Hot Ditch - to catch some large speckled trout.  Actually, nothing could be further from the truth.  In fact, my largest trout have come from other areas in the river all together.  Don't get me wrong, you can catch some seriously over sized specks in the locations aforementioned, but the bite can be off and provide you or even worse, your charter, no significant action during your scheduled outing.

I met my buddy Joe at the launch a little after 11:30 and set out in search of some toothy specks to chase our presentations for the day.  It wasn't long before I hooked into a decent 18" trout no more than 10 minutes after launching and on my third cast of the morning and it wasn't even noon yet.  The key for us on the day was moving.  Every time we would get into somewhat of a steady bite, the area would turn cold just as quickly.  The bite ran in 15-20 minute cycles on and off all day for us.

We fished several areas and caught fish all over in every place we stopped.  We caught fish both north and south of the high rise, both in and outside of the "hot ditch", and in both deep and shallow water.  The key was to keep moving.  We saw several other boats and kayakers on the day spend their time hovering over one spot and not catching nearly as many as we caught. 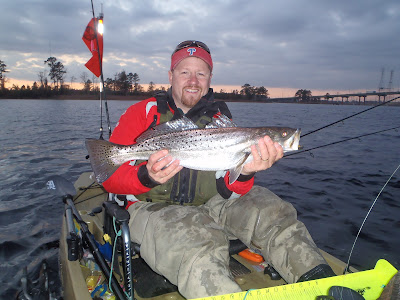 We used two primary lures - soft plastics in white and electric chicken, and a MirrOlure.  My largest specks on the day were 21.5" and 20.5".  I had a citation to the kayak and lost it when the speck turned his head the opposite way and threw the hook.  At least we know they are still there.  You just have to put in the time and be patient.  On the day, we caught over 45 trout an one striper, including Joe's 4th release citation of the week measuring at 26 that was caught as the sun was losing its battle with the onset of dusk.  Here's a quick video of our outing:

Still a great day on the water.  The weather cooperated for the most part, save for a few bouts with the wind at various times during the day.  We ended the day shortly after that and made our way back in the dark to our recovery spot contemplating the fish that were missed and the ones we caught.  A great way to spend a day in the ER. 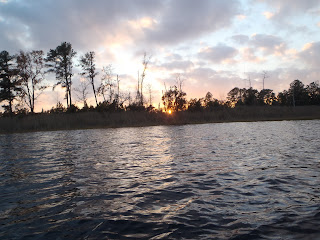 Tight lines and be safe - remember to dress properly for the colder air and water temperatures.

Posted by Hanover_Yakker at 2:35 PM