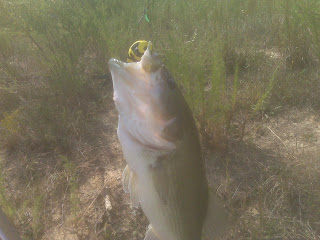 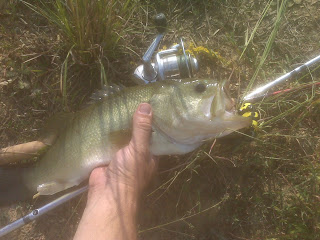 What a great way to wrap up a solid day on the water.  Next time, "Chewbacca" makes his debut on the water - the Brown Bull version of the Clone.  Until then, tight lines and hawg memories!!!
Posted by Hanover_Yakker at 6:30 AM No comments:

A Journeyman's Quest for froggin' waters

As many of us casual fisherman have learned, there are endless bodies of water to explore and fish in this wonderful country we live in........if you have permission, if you have a boat, if you have the time, etc etc.  Well, I remedied part of the equation earlier this year with my first water going vessel - a kayak.  More precisely, a 2010 Wilderness Systems Ride 135.  As far as where to fish, well Google Maps, you are indeed a near and dear friend.  Because of your satellite views, I have discovered countless bodies of water that I never knew existed.  Which is what leads me to this - my first entry into the world of blogging about life.

For those that know me, I am an avid fisherman who has recently discovered the joys of fishing with top water frogs.  To date, my frog arsenal includes: SPRO Bronzeye Poppers, SPRO Bronzeye Jrs., several colors of Stanley Ribbits and soon to be Clones (a future post will introduce you to them).  Currently, my frog of choice is a Stanley Ribbit.  In the past year, I have caught more Largemouth Bass on this frog than all the bass I have caught in my fishing "career".  Granted, my true attempts at fishing early on were limited due to lack of knowledge and lack of travel options to get to the local ponds and creeks.  Now, I can reach any body of water I choose to explore with my vehicle and kayak atop the factory roof rack. 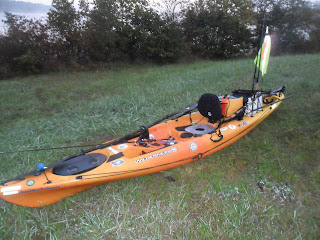 I have also discovered the joys of commercial ponds recently, most notably a series of ponds that feed into one another near my home.  Although I was later asked to not fish on the property anymore, I caught several little chunkers on my trusty black Ribbbit.  Mind you, I was not trespassing, as it was a public location.  Rather, the security officer simply asked that I not fish, because the facility paid to have the pond stocked and did not want any fish removed.  I politely told them no problem before I left, assuring them that I only practice catch and release anyway.

Which brings me to my latest discovery in the middle of a remote corporate office park.  I was looking for two small ponds I saw on the map that I later learned were clearly marked No Trespassing, when I noticed a small drainage pond that was hidden in the brush.  I looked around and saw no signs, so I grabbed my rod and a couple Ribbits in green and brown.  As I walked up to the pond, I noticed the water was crystal clear and there were bass - tons of them!!!  And they were schooling like carp!!  There were at least 20 bass in the school with several in the 12-14 inch range.  I also noticed a larger shadow lurking in the depths, so I cast out past the school with a brown Ribbit.  It was attacked with an aggression I had not seen in bass before.  Several of the smaller bass attempted to eat my Ribbit, but the largest bass chased off the little ones and slammed it hard.  I gave the requisite two count with a lowering of the rod and set the hook.  15 seconds later - an 18.5 inch Largemouth Bass.  I cast the frog back out and promptly landed another nice one at 17 inches. 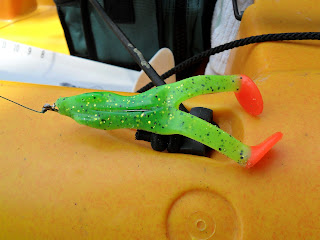 My brown frog had taken a beating from those two chunkers and was in need of replacement.  Well, I only had a green version of the Ribbit, so I rigged it and worked my way around the pond to the other side and land 2 more in the 14 inch range.  I missed a few which happens to us all no matter how perfectly we set the hook..  Sometimes the fish wins.  A couple more casts, and I notice my Ribbit is tracking oddly and not making its requisite plop plop plop on the retrieve.  I reel it in only to discover that the last fish had hit so aggressively that he tore not one but both legs clean off!!  Man these suckers sure are feisty today.  Anyway, I rigged my last frog I had brought with me and cast it back out for another go at the last one I missed.  He hit it in the exact same spot and darn it if he didn't rip off one of the legs to boot!!

I cast the frog out to see if it will still worked before calling it a day - it still worked even with only one leg, so I headed over to the other side of the small pond to cast a few more times before heading home.  I made a near perfect cast along the bank about 20 yards and a foot off the weedline/bank.  I barely get the single leg thumping before my frog is attacked again - best fish of the day at 19 inches.  All in all not bad for 30 minutes of fishing on an unknown pond in the middle of nowhere as corporate America was winding down from a long day at the office..........
Posted by Hanover_Yakker at 4:59 AM No comments: