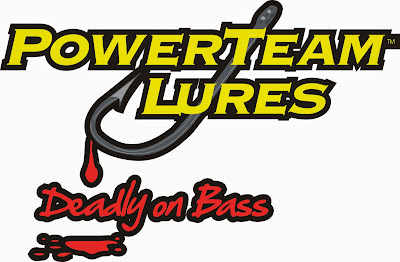 The goal of the night was to get some time on the water after a long overdue hiatus.    Between Mother Nature, family obligations, travel baseball and work I have barely had time to sleep.  Well, I sacrificed sleep for a change recently and vowed to get out on the water regardless of weather conditions.  As luck would have it, it was raining, but I went anyway dang it!

So glad I did.  I met up with my fellow TKAA buddy Wayne, and we agreed to fish the Hampton side of the Hampton Roads Bridge Tunnel.  We launched shortly before 6pm into steady 15mph winds out of the NNW.  I located a whole mess of baitfish on my Lowrance Elite-4x DSI but couldn't locate any big fish.  We moved about all over and finally setup shop in a couple of drop offs and started working our Powerteam Lures Curly Tailed Grubs.

Neither of us had any luck, so I decided to try a different tactic of slow drifting the grub with a raising and lowering motion followed by a subtle twitch.  It was on the second set of movements and the final twitch that I had my first fish of the evening - a spunky 13.25" Grey Trout that was measured, photographed and released.  It hammered the Blue Hue PTL grub dipped in Hog Tonic.

This fish was significant, because it was also the first fish landed on my new custom Bull Bay Rod.  Kelly and Dustin Phillips are good people and have created arguably one of the best rods on the market.  Their SenZigrip technology is innovative and already in high demand, so get yours while you can!  I quickly setup for another drift but found no more takers.  I decided to hit the bridge and and work the light line.

I ended up fishing from piling to piling looking for any signs of activity.  After a few minutes of searching, I stumbled across something I had never seen before - a trout blitz on juvenile ribbonfish.  It was very cool to watch, but I was there to catch some fish.  I left that activity and honed in on some aggressive action a few pilings down and hooked up almost immediately with another fish.  As I was reeling it in, it spit the PTL grub only to have it inhaled by a zealous follower - a smallish 11" grey that lived to fight another day.

I saw many more fish, but few of quality size that invoked any action on my part.  That is until I saw a larger grey shadow hanging a bit lower than the others, so I made a short precision cast and dropped the grub practically right on its nose.  It slammed the grub and bent the rod over immediately.  While fighting this fish, I was getting slammed hard into the pilings from the NNW winds that had picked up to about 20 and started white capping.  I was positioned incorrectly on the windward side of the piling in order to target this fish as stealthy as possible, but it also placed me in a very unfavorable position for actually fighting and landing the fish.  It ended up costing as the beastly speckled trout came unbuttoned as I was reaching for it.  Easily 20"+ and would have been my largest trout this year.

I quickly forgot about it and moved on.  For the next 30 minutes, I couldn't find any fish - not even any baitfish.  I kept looking and found some activity a little further down.  When I saw the surface strikes, I knew it was a striper.  I fired off a cast with a pearl PTL grub this time and was rewarded immediately with a strong surge in the rod as the grub was inhaled.  I leveraged the Bull Bay Rod and the striper just had no chance.  I easily maneuvered him away from the structure and guided him right to the side of my Pro Angler.  A quick lip grip and a nice 21" striper was on the board. 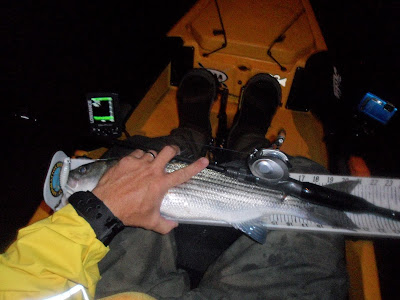 After a quick picture and measurement, I released the striper to live and fight another day.  I saw some activity in the same spot, so I fired off another cast to the same spot and landed my fourth fish of the evening - a nice 19" striper. 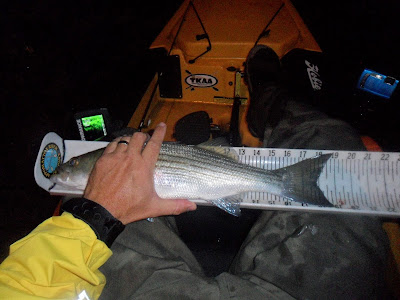 After that, I checked the time and knew I had to head in if I was going to get any semblance of sleep before our family's gathering to pick apples the next morning.  I made it home, unloaded all my gear, drove to the in laws house and shared some time with family.  I had to head home later in the day to take care of our dogs, but I managed to make it through the rest of the day and promptly fell asleep on the couch.  It was a long and grueling 48 hours, but it was well worth it.

Get out and satisfy that urge!  Tight lines and be safe!

Posted by Hanover_Yakker at 8:39 PM No comments: