Here in 'The Old Dominion", winter has been kind to say the least.  Sure we had a period of sub-freezing temperatures at night but never any extended freezing temperatures during the day.  As a result, old man winter has not reared his ugly head.  When you combine the benign winter with mild to warming temperatures prior to spring arriving that usually means the fishing turns on in spades.  For me, this trend has not coincided with my days off, rather the onset of spring also means more rain which has unfortunately been the case for me.

I have been rather envious of my fellow kayak anglers of late, especially after reading their fishing exploits - the guilty parties know who they are but you know them as Rob Choi, Seth Goodrich, Bill Ragulsky and Justin Mayer.  Combine that with the outings I have been reading by Kayak Kevin and on the various forums about the exciting Tog bite that is on and you have yourself a recipe for some anxious fishing genes itching to get out and get some bites!!!

With the sky-rocketing gas prices, I decided to stay local and hit the neighborhood "sweetwater" and chase some "greenies" - aka Mr. Bucketmouth, the ever popular Largemouth Bass.  The spot I chose is where I previously had an epic day on the water and had landed by kayak best 21" Largemouth.  I knew the air temps for the day would be steady in the morning, so there was no rush to hit the water at first light like a typical summer day where the air temps get hot quick.  So I loaded up mid-morning and headed on over to the pond with a planned launch time of around 9:45am.

I got to the pond on time and loaded the Hobie Revolution 13 up for a planned 4 hour outing.  I took a different approach today and carried out 5 rods in total.  Those that know me know I usually carry 2-3 rods at most, but I wanted to have the greatest amount of flexibility in the short amount of time on the water.  Also, the targeted water is relatively shallow with maximum depths of 11' in one area but is consistently 6-8' and was in a state of transition from winter to spring with a steady warming trend over the last couple of weeks.  Who knows what the bite will be, so it is better to be prepared for varying approaches.  I went out with 5 rods rigged: a jig-n-craw setup, a spinnerbait, a suspending jerkbait, a finesse soft plastic and an ultralight with a small shallow running crankbait. 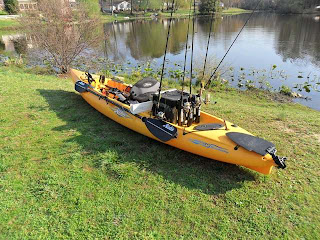 I headed to to the southern end thinking that would be the end with the most exposure to the sun already and would most likely have the most active fish for this time of the morning.  I worked the sun-exposed banks with moving presentations first to see if there were any actively feeding bass or pickerel ready to chase.  No takers for the first part of the morning up through lunch time.  I did have an audience throughout the day as the endless turtle population was in force and appeared to be unimpressed with my activities.  I think next time I will remember to bring along my Castalia Bombshell Turtles and give them a go. 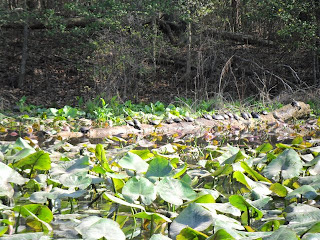 I then remembered that this pond is shallow and may have warmed up quicker than normal so I switched tactics and decided to target the shady areas extensively using slower presentations.  I switched over to my finesse rod setup which had a Confidence Baits Floating Bird in Blueberry color paired to the Draggin' Head in 1/4oz.  Hindsight being 20/20, I probably should have opted for the 1/8oz. version to force myself to fish slower.  I think the fish were still somewhat lock jawed and did not show much interest in feeding today.  I managed a total of 3 bites with one Largemouth landed and another that was a "hands-free release" kayak side in the 4 hour outing, but like many outings during a transitional period, the bite can sometimes be difficult to find.

While the outing wasn't a huge success from a numbers perspective, it was still productive from the perspective of having caught a fish, had some bites and enjoyed my time on the water finally.  Looking back on the day, I think the best approach probably would have been to target the sun line where the sun meets the shaded area on this pond, and the bait du jour was definitely small profile slowly worked soft plastics.

My next post will hopefully detail the installation of my latest toy for the kayak - the Lowrance Elite 5 DSI!!  I have the Lowrance Scupper Transducer kit and the Hobie Full Size FishFinder Installation Kit at the house and ready to go.  Now I just need to find a period of 2-3 days where the weather is favorable and won't compromise the cure time on the adhesives I use during installations.

Until next time, tight lines, be safe and remember to take a kid fishing or share some time with a service member.  The rewards and feelings you glean from the experience are priceless!
Posted by Hanover_Yakker at 7:03 AM No comments:

The recent warming trends here in Virginia has sent many of us kayak anglers, including myself, into a fishing frenzy with the desire to get out on the water.  Sometimes this line of thinking can get in the way of being smart.

Such was the case last night.  I had been longing to get out on the water the last couple of weeks, but family commitments and timing have not been in my favor.  This time of year is a big saltwater focus window for me, since many of the species targeted during the prime months are now out of season but are still plentiful and willing to bite.

Yesterday's rising temperatures got the juices flowing, and the preliminary research indicated a forecast of winds out of the SSE around 10 with an incoming tide only running at .2 for my particular target area.  The prime window for targeting fish would be around the 10:00pm time frame.  I also saw that a storm front would be moving in late on Friday and into Saturday, so my thought was that Thursday evening would be the last chance to get on fish for this weekend with a planned outing of 2-3 hours in total, otherwise I would have to wait another week.

As I made my way towards the water, I felt the winds blowing stronger than had been forecast even pushing my van side to side on the highway.  No worries I thought, since I was going to be targeting a sheltered cove in the inlet.  I arrived at the launch to be greeted by winds blowing not out of the SSE, rather they were blowing out of the NNE and were stiff at easily 20mph not the forecast of 10-12.

Not to be dismayed, I knew that the launch was exposed to mother nature and was not always indicative of the true conditions on the water.  I also knew that the recent warming trend was not indicative of the true temperature of the water, so I still dressed for cold-water immersion and took the appropriate safety precautions and secured all my gear.

I launched my Hobie Revolution 13 into the teeth of the wind and the incoming tide and quickly realized that the plan for the evening would be short-lived if I fished the area I had originally planned.  I pedaled out cautiously and began to realize that the planned outing would not be a success.  I found my spot and saw some fish, but my attempts to target them by sight casting were quickly nullified when each cast resulted in my lure getting snagged on the endless floating seaweed and other natural debris in the water.

During one of the retrieves, the wave sets started getting more intense in frequency and amplitude.  The area I was fishing is know for the shoaling that occurs, so any increased wave action combined with heavy winds results in some nasty water conditions both in clarity and intensity.  So, I stowed the rod, and I used my rudder to track backwards with the waves rather than risk making a turn and getting broadsided by a 4-5' swell unexpectedly.

When I noticed a break in the intervals between wave sets, I turned the rudder left and pedaled a little further out to get past the shoals to see if the rest of the area was as bad.  The wave action turned into more turbulent waters with a washing machine effect combined with the larger waves and stronger than expected winds.  I decided at that point that all the desire in the world to catch some fish is not worth the risk of one's own life.  I waited until a longer shallower set came in, and I turned the rudder and pointed the Hobie back to the launch.

I later learned that the actual winds were gusting to 30, well above the forecast of 10-12.  The moral of the story is simple - know your limits, and don't ever sacrifice your personal safety for the sake of fishing.  You can always come back another day.

Tight lines, be safe out there, dress appropriately and take a kid or service member fishing.
Posted by Hanover_Yakker at 6:29 AM No comments: