It's that time of year again, when the big ole' girls start making their way towards the shallows and the males are ready to make some beds.  For me, it is a sign of the top water bite beginning to awaken from its recent hibernation.  Several of my fellow kayak anglers agree that there is no rush like that of a top water bite.  The adrenaline rush you experience while waiting for that one moment when the strike will occur.

Many fish are lost during this critical phase of "the catch".  If you are using a trebled lure, then your chances of a missed fish are somewhat decreased as long as the fish strikes the lure and engulfs it.  Several species, both fresh and salt born, slap or "ram" their prey in an attempt to disorient it.  It is after this initial strike when the real attack occurs.  For those of us that opt for other top water approaches, say a frog bait of some kind, the instinct to set the hook immediately is hard to resist.

Don't get me wrong, I have reaped the rewards of the ill-fated premature hook set only to be quickly greeted with a projectile with hooks exposed hurling at MACH 2 right at my head.  No, I am far from innocent of this crime; however, a good friend, Kayak Bass Fishing founder and fellow kayak angler Chad Hoover, taught me a very valuable lesson.  The key is rod position when the fish strikes.  If your rod is parallel to the water or lower, when a top water strike occurs, you are not in the best position to make an effective hook set and will most likely lose the fish.

The key is to keep your rod tip somewhere around the 10-11 o'clock  position, so that when the strike occurs, you lower the rod tip down then reel in the slack with a quick 1,2 count then make the hook set.  If done correctly, regardless of the top water frog you are using, the hook should set itself in the top or side of the mouth depending upon the hook style you are using.  It doesn't matter if you are using a Stanley Ribbit/Zoom Horny Toad style frog, a Capt. Ken Daubert Clone or a SPRO Bronzeye frog, your hook set should not miss.  If you are too quick and fail to resist the urge to set the hook immediately, you will experience firsthand the supersonic frog!!


I am a loyal Stanley Ribbit angler; however, I am anxious to get my Clone frogs on the water this spring to see firsthand what all the commotion is about.  Some of you may remember that I had a short outing back in September of 2010 where I took the Clones out for a test drive and was very pleased.  This year, I have some prime froggin' waters to hit up when the weather makes its final turn for the better hopefully by March end. Don't get me wrong, I still have my Ribbits, my SPROs, YUM Money Hounds and even a Rebel popper.

But there's something about these new Clone Frogs that I just can't wait to satisfy this urge to tie one on and hunt some big ole' fish.......sometimes it is a shocking eruption that will make you almost jump out of your seat, other times it is very subtle and uneventful.  My second largest fish of 2010, a 19"+ Largemouth, barely made a noise when she inhaled my Ribbit.  If I had not been watching the frog all the way back to the kayak, I would have missed her. 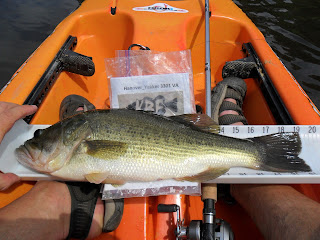 My third largest fish of 2010, another 19" leaped out of the water as the Clone was about to land.  I barely had time to close the bail on my spinning reel, before she inhaled the frog and took off. 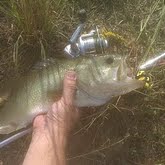 So let the warmer weather come, I will be waiting with my frog arsenal at the ready!!!
Posted by Hanover_Yakker at 4:33 AM No comments: