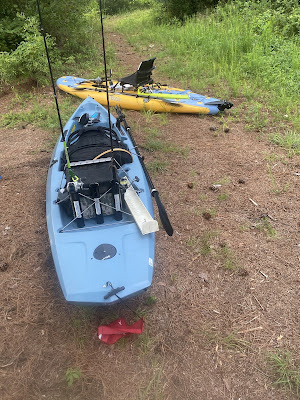 Quarantine 2020 has us all going stir crazy and sick with cabin fever. What better way to fix that than a little time on the water? The last couple of weekends have found my son and I exploring a local pond rumored to have a few bigguns lurking about. Let’s set the stage for you: a private pond with no apparent angling pressure filled with patches of lily pads, lay downs, and some overhanging trees. The deepest parts of the pond are right at 8’.  When I learned I could fish this pond through the graces of the owner, I was more than excited as I had been eyeing this spot for years and pondering the potential.

My son was also stoked as this would be his first chance to use his new baitcaster combo he received for his birthday. I armed him with the only line I use on my froggin setups - Sunline FX2 Frog Braid as well as a tackle tray with some plastics and some Scum Frogs. Since my son had never used top water frogs before, I figured Scum Frogs were fairly goof proof and would increase his chances of coming tight if a fish inhaled it.

I loaded up the Hobie Compass and Hobie i11s inflatable as our hulls of choice and loaded up the rest of the gear the night before. I also setup his other rod with a wacky rig in case he got frustrated with froggin. We headed out at first light and were more than pleased when we saw the water that lay before us. A literal Mecca of froggin heaven before our eyes and looked like it hadn’t been touched by any anglers in over 10 years.

Gear for the day:

My bait of choice should come as no surprise for anyone that has followed me since the beginning - the Stanley Ribbit with a touch of Hog Tonic just to encourage the bass to hold on a tad longer. I started working pad edges and open lanes as well as shaded banks. After about 30 minutes, I had my first bass on the Watermelon Pearl with Hot Feet version. For the next few hours, the action was constant on both trips. Literally a blow up every 20 minutes with not all of them coming tight.

The mornings were filled with typical pond bass ranging in the 14-16” range which was to be expected. Most likely this pond doesn’t have any harvesting occurring, so the bass are all similar in size and fighting over the same food sources. I did notice a few bluegill beds, so I imagine there are a few chunky bluegills amongst the surprises lurking in there. While we didn’t find them on these two outings, we did find a few good ones that would’ve been tournament grade fish in the 17-19” range with my largest measuring in at 19.5”.  My son caught 5 fish in total and lost the same amount. I had better luck landing 8 bass each outing for a total of 16 landed but also had my fair share of misses from smaller bass that were overzealous.  My best five totaled 81.5” - a 19.5”, two at 16” and two at 15”. 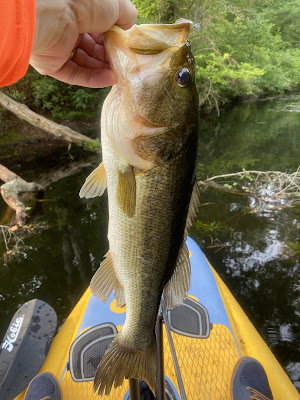 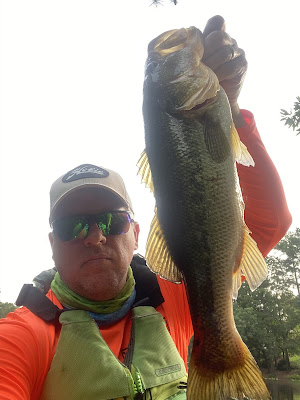 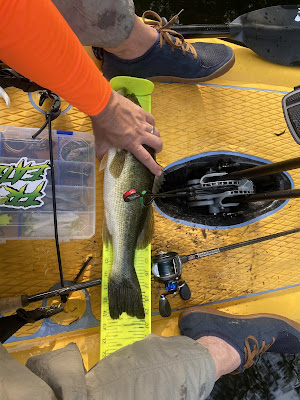 While I had moderate success, the high point of the trip for me was watching my son apply the tips I had taught him and catch his first bass on the frog. 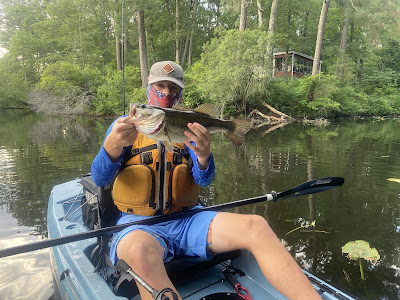 It’s always reassuring at the end of the day for me when I am cleaning up my tackle and inspect my Ribbits to find that the heads are shredded up good from where the “teeth” of the bass have chewed up the head so much the color is gone and the bodies of the frog are split open from the vicious strikes and hooksets. Even though the frogs are no longer usable, I made it through two kayak outings and only used one Ribbit per trip. That’s a testimonial for how durable Stanley Ribbits are. 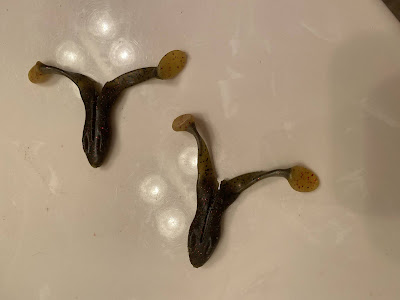 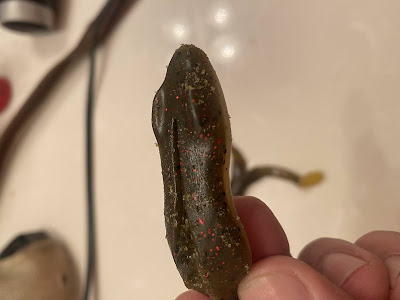 We plan on coming back again, but next time I’m only bringing the fly rods - one for the bluegills and one for the bass

Until next time, stay safe, use a face mask anytime you will be out in public and take a kid fishing!!

Posted by Hanover_Yakker at 10:05 PM No comments: