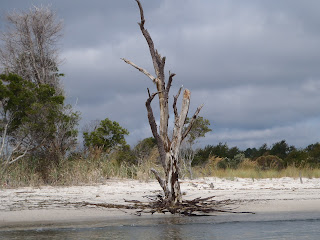 Sounds funny and it really is ironic in some ways but my day on the water in Mathews County this past Wednesday was literally.......One fish, two fish, redfish, bluefish!  I landed three fish total over the course of 6 hours of fishing and hitting two different locations with my friend Darren.  We agreed to launch around mid-morning, since the tides and currents were running a little later than we normally launched in the past.

As fate would have it, the stars did not align for us on this day.  The day before, a front began moving in and resulted in a little bit of a cold snap overnight with temperatures creeping down into the upper 40's.  As per usual, the winds were up as well blowing at a steady 10-15 knot clip out of the West, not the forecast of 5-10 as noted on various weather sites for the area.

I arrived a few minutes ahead of time, so I figured I would just ride the outgoing current out to the planned fishing area.  Along the way out, there are plenty of fishy locations to target.  My favorite target areas are the push water spots in front of extended grassy points in tidal creeks.  This is the area immediately in front of the point that creates a lull in the current flow and allows any fleeing bait fish a place for refuge out of the swift current.  It also is a primary ambush location for predators like redfish, stripers and speckled trout who lay and wait on the downstream current seams and eddy pools. 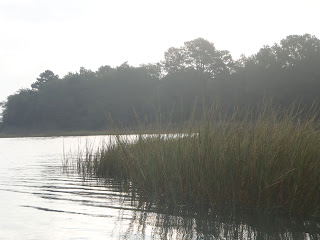 So, I worked each of these locations as I drifted along and only encountered one half-hearted nibble.  When I made it to the inlet, the current was running a little better, so I found an eddy to sit in.  This technique allows kayakers to utilize the natural movement of an eddy to hold your position and still be able to fish without having to anchor.  Positioning myself here allowed my bait to work its way naturally with the current by casting back into the creek and letting it drift out to the bay with only a subtle twitch here and there.  Nothing.

I figured maybe the fish had moved out of the inlet already since the prime window for the outgoing current had already passed, so I headed out and worked the channel edges along the shoals by trolling two different lures.  Darren had made his way out to the inlet and anchored up in the same current seam I had just left.  He finally got some action and landed a smallish 14" striper.  For me, a whole bunch more of nothing.  I did have a gull drift along with me for a bit and watch me with some measure of curiosity as I moved about. 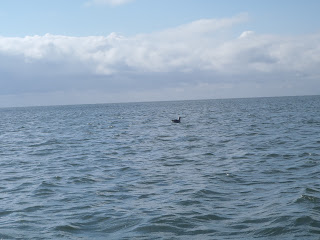 When no bites were found, I moved back to the southern side of the inlet and worked the shoreline grass and parallel cuts and drop offs.  Encountered a few small croaker bites but nothing of any size.  By this time, we were both contemplating other target areas, especially when one of the locals rolled up on Darren in their 18' fibergalss beast and literally dropped their anchor right on top of Darren.  Needless to say, neither of us were pleased, but who are we to argue with a mass of fiberglass and gas?   So we left and made our way back into the tidal creek.

I worked the shoreline along the way where I had previously landed some nice croaker and reds in my past trips to the area. I was rewarded with what would end up being the best fish of the day, a redfish that measured in at a shade over 15" that had a cool dot pattern.  He hit a chartreuse mullet on a Marsh Works short shank jig head. 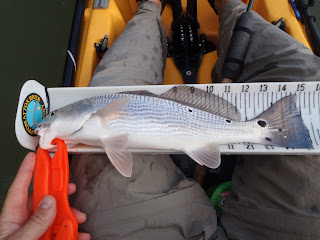 We worked a few more of the same target areas as I mentioned before, as well as creek mouths......... 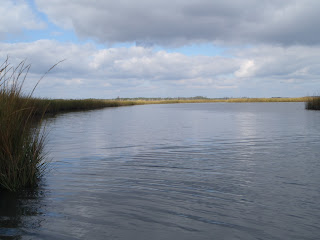 and the small grass islands that you find buried deep inside the creek channels with nothing more than a couple minor hits but no takers........ 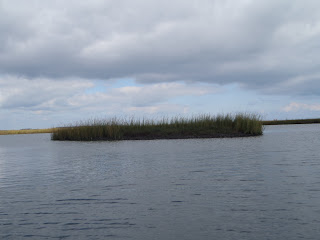 After little action, we decided to load up and hit another spot that had reports of recent activity in the way of stripers.  We arrived and launched with high hopes of getting on some decent fish before the day was over.  Unfortunately, more of the same.....nothing.  I worked some structure around the bridges and got a few small hits but no takers, so I moved to an adjacent creek that had similar features as before - some current, grassy points and push water creating current seams.  A few minutes of diligent work and patience rewarded me with the second redfish of the day, albeit smaller at only 12" but a little chunky and this one was landed using the same jighead but with a shad colored mullet. 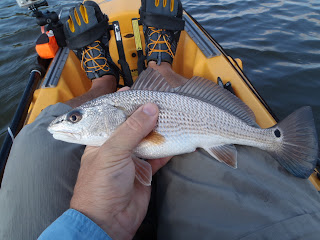 About this time, Darren called over to me on the phone and had decided to bag it for the day and head on in.  I agreed with him and told him I would be right behind him.  As I started to head back in, my line started to jump then stop, jump then stop, jump then stop.......I reeled in the slack to see if there was anything there and felt the head shake of a hooked fish but it didn't put up any fight.  Must be a small one then.  I retrieve all the line and quickly learn my reward was a bait fish sized bluefish..... 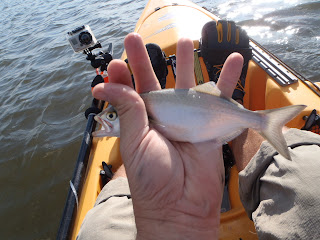 Not the best way to end the day, but I still caught a few fish.  In hindsight, I had broken one of my rules when planning a fishing trip.  I had launched with the intent of fishing the day after a front moved in and temperatures dropped.  I traditionally only fish in this situation when the temperatures are rising not falling, and I typically wait at least 48-72 hours to let the weather and water conditions stabilize.  If I had followed my basic rule, I would have targeted Friday as my fishing day versus Wednesday.

Oh well, I still worked my fishing plan for the day, caught some fish, spent some time with a friend on the water, found a new location to fish and returned home safely.  Not too bad of a day, even if allI could think about on the way home was how I had landed........

Tight lines, and be safe!
Posted by Hanover_Yakker at 7:11 AM