Each year, I always tell myself to take a day or two and try to target largemouth bass during the fall transition.  For many bass anglers, this is considered a right of passage or even a requirement for any experienced angler.  As fate would have it (actually family commitments), the last three years have not afforded me the chance to get on the water during this time period.  Well, I finally was able to make several trips over the course of the last week or so and try to get in on some of this famed fall transition I have always read about.

The first trip was a success and resulted in two of the three largest largemouth I have landed this year at 18.5" and 19.75" last week at the Smithfield HOW Event.  I followed that trip up with a tournament win at the inaugural Hooked for Breast Cancer benefit tournament.  My latest outing was a trip to the local neighborhood pond having not fished it since July and August of this past summer.  The plan was to keep it simple as far as tackle goes - a spinning rod with a small finesse style soft plastic worm, an ultralight spinning rod with a beetle spin for the crappie and bluegills, and a frog rod in case any topwater action was happening.

I launched shortly after lunch and was greeted to a pleasant day in the mid-70's with the slightest hint of a breeze crossing the surface of the pond.  I started off by targeting the now withering lily pads with the frog, then would follow up with a few casts using the finesse worm and ending with the beetle spin.  I worked this pattern for the first half hour until I missed a massive blow up on the frog.  That told me all I needed to know.  The ultralight and finesse worm were stowed for the time being and I focused on the frog.  I eventually coaxed a couple of bass into the Hobie on the frog, but none of them were substantial by any means. 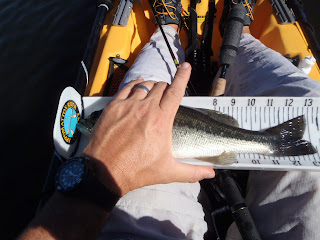 As I made my way out of the main body of lily pads, I started honing in on submerged structure, which for this pond means trees and stumps.  I switched over to the ultralight first to try and coax the aggressive fish on the outer edges of the submerged trees and worked each pocket until I covered the whole target area.  After a few minutes of this tactic, I was rewarded with a feisty little 14" largemouth that slammed the beetle spin hard. 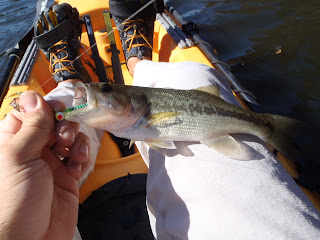 Once I finished that approach, I worked the same target areas from the outer edges back to the inner pockets using the finesse worm.  A key point needs to be clarified here - finesse has different meanings depending upon how you are fishing.  You can use "finesse" tackle or lighter gear with smaller presentations, or you can use "finesse" tactics by keeping your movements and presentations slow and purposeful when the bite is finicky or slow.  I was using the former paired with traditional soft plastic worm presentations having learned that the fish were still aggressive.  For my soft plastic worms, I use the Confidence Baits Draggin' Head almost exclusively now, because the hooks are razor sharp and require almost no "pro-style" hookset.  Just a slight raise of the rod and the fish is hooked.

In a pond of this size, the depths are not huge but the structure is everywhere.  Some of it is fized like the submerged trees and stumps, while other forms of structure are transitional.  These forms include algae mats, floating clumps of leaves and my favorite - floating logs.  While targeting a submerged tree, I saw what looked like the top of a tree in the middle of the pond.  As I maneuvered closer, I noticed that it actually was a huge floating laydown from where a tree had fallen in the water at some point and had ended up towards the shallow end of the pond.  The top of the tree was just barely afloat and created a prime staging area for a bass in the middle of the pond.

I fired off a cast past the laydown and let the plastic worm drop straight down before beginning my retrieve.  The first cast got hit hard at the kayak but came unbuttoned.  I fired off a second cast and worked it just like before but then paused as it came closer to the kayak.  Even with my finger on the braided line, the pickup was virtually undetectable until I saw the line moving away from me.  A quick vertical snap hookset and the fight was on.  Thirty seconds later and the battle was over - a nice chunky 17.5" largemouth made it's way onto the measuring board! 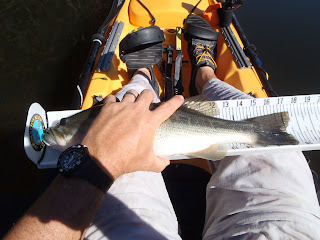 The rest of the day was just as productive with the plastic worm taking center stage and landing me five more bass, albeit none over 13".  My favorite part of the day was working a huge lily pad field at the back of the pond.  I could see multiple pockets of open areas back in the pads that normally are not accessible.  So I parked the Hobie in a spot that looked appealing and started working the open pockets with long casts and my trusty Stanley Ribbit.  I missed two blow ups - one from the bass not taking the frog completely for a hookset and another from the Ribbit's leg getting hooked and blocking the hook from a good hookset.  I was able to finally capture a frog strike on video even thought the fish wasn't huge.  All in all, it was good day for a short three hour outing.

The best action on the day was captured in video form as well, so enjoy the video montage.


The fall transition is in full swing, so get out there and satisfy those fishing urges you have.

Tight lines and be safe!
Posted by Hanover_Yakker at 4:59 AM